An irritating aspect of dementia?

November 20, 2018
Questions, questions, questions.  These can be the bane of your life if you are living with dementia.  The person with the diagnosis asks them constantly, the person one step removed finds themselves doing one of several things in response.  We either give the same answer over and over or we snap and say 'I've already told you' or we assume that we're not being listened to etc etc.  However we respond all too often, at least in the beginning, we fail to consider the reason for the question.  So why all the questions?  One theory I heard a couple of days ago is that 'it's just another of those irritating things about dementia so you might as well get used to it' which is not a solution that endears itself to me.  There will be a reason, we just need to look for it.  A friend looks after her brother who has  dementia.  The friend broke her leg so couldn't do all the things she usually did and hobbled around on crutches.  Friend's brother continually asked what she'd done; on and on until friend was at screaming point.  The thing is that the brother was worried about her but all he recognised was the feeling of being anxious.  He had no idea why he felt that way, he just knew something was different hence the questions.  My friend eventually (and in exasperation) told her brother that her leg hurt but it would soon be better.  The questions stopped.  My mum, who may or may not have dementia, is to have an infusion once a year to improve her bone density.  We went to the hospital yesterday to discuss what was going to happen and when.  It was all organised for 3 weeks time and we came away.  For the rest of the day she asked me what she needed to do in relation to the hospital appointment.  I began by telling her step by step what was going to happen but she kept asking.  In the end I just told her that it was all organised, was on her calendar and she didn't need to do anything.  She stopped asking the question.  Ash used to ask me every morning whether I'd slept.  I almost always said no and then went into exhaustive detail of how I had spent my night.  Why I thought he needed that information I do not know but I insisted on telling him and then he would ask again and again.  One morning he asked me, I gave the usual answer and then, 5 minutes later, he asked me again.  That time when he asked 'did you sleep?'  I said 'yes'.  He hasn't asked since.   The problem with accepting behaviours as something to be 'suffered' is that there is no room for improvement.  If we look for a reason it may be possible to make changes, remove the anxiety and improve life for everyone around.  Why wouldn't we want to do that? 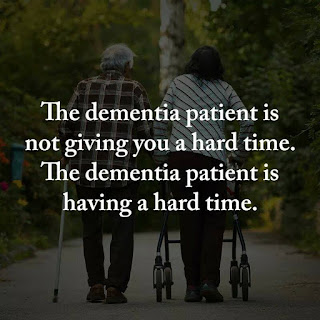