Life is a self fulfilling prophecy

November 26, 2018
A friend once said that she had told her psychiatrist of someone she knew who had an expectation of happiness in her life and was also always happy.  The person she was describing was apparently me.  Now I'm not sure about an expectation of happiness but I do think that if we look hard enough we can find it in most situations.  I've thought this for a long time now but a few years ago when Ash and I were at rock bottom emotionally, financially and mentally I decided that I was wrong;  that happiness was present in some people's lives some of the time but it wasn't something we could control.  This life we're living now has shown me all over again that happiness is something that can be found and, often, in the most unexpected of places.  As in everything else to do with dementia (and any other aspect of life) you have to work at this.  I like to plan and I plan for all eventualities.  I was discussing Christmas recently and realised that around September/October I begin, loosely, to plan different scenarios.  If we're on our own we'll do this, if we've got my mum we'll do that, if we're going to friends this will need doing, if we're staying at home that will need doing.  If I start early enough all I then need to do is wait and see which scenario I need to use and then  I can build on the one that's required.  One year it was just going to be Ash, Jake and me so I suggested a walk in Derbyshire with a picnic lunch at the top of some hill or other.  This was roundly rejected by two thirds of the affected party on the  basis of temperature, weather and the fact that everywhere would be closed if we needed to get warm and/or dry.  Instead we invited a friend who was going to be spending Christmas Day alone and played games late into the evening.  The thing was I had a plan to start with so that I wasn't dismayed at the idea of just the three or us, it started a discussion and then I just rearranged things as necessary.  Another year my Mum and step dad came which would have been lovely except he wasn't well and would have much rather been at home sitting in his own chair and sleeping in his own bed.  Mum really wanted to come so we compromised, they came for one night instead of two, stayed in self catering accommodation down the road (where he didn't have to put a show on for anyone) and we invited friends to join us to lighten the atmosphere.  The thing is there was the makings of a plan before we settled on the final arrangements and this I think is the key.  I have just told one friend that I have a long term plan for the Christmas when, for whatever reason, Ash and I will be on our own.  We'll start the day with a cooked breakfast, then a walk on the beach, Christmas lunch from M & S followed by a film in front of the fire (currently I favour The Holiday, Pretty Woman or Mama Mia 2) then a walk through the woods before back home to watch either The Great Escape, Butch Cassidy and the Sundance Kid or The Dambusters for Ash.  Tea from M & S or Waitrose then finish off the day with a game of Scrabble followed by a couple of chapters of whichever book I'm reading at the time.  Now that might not be the most exciting Christmas ever but if I have it at the back of my mind then I can tweak the plan as the years go by and it gives me a very different kind of Christmas to look forward to.  I do the same with holidays.  I think of different places I'd like to visit and then can pick one from my list to suit our needs.  I had a list of places I wanted to go ski-ing but they've had to be removed as Ash wouldn't cope.  The great thing here is that, because they weren't the only destinations or the only activity on the list I just get to choose from the one's that are left.  It is a very long list so, even though our options are now more limited, there is still plenty to have a go at.  So my suggestion for ongoing happiness is to have plenty of plans, develop them as you go along (sometimes I do this when I can't sleep) and then when you need one you just select the most suitable from your collection.  I do this with birthdays, holidays, Christmas, days out and on and on and on.  As you may guess there is never a shortage of things to look forward to. 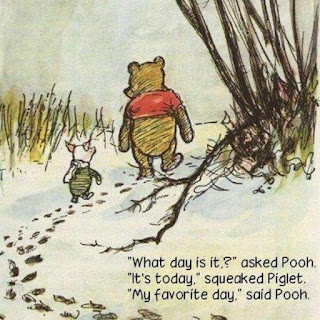 Also remember that comments are always welcome especially now that I've managed to use the correct settings so that we can read what you put.

If you have a question or comment you don't want to share with the world then feel free to email me at memoryfortwo@gmail.com.