December 18, 2018
At the weekend we were invited to a small party at a friend's house.  Ash can't cope with groups of people nowadays especially when he doesn't know everyone so he opted to stay at home.  I on the other hand have decided to grab social invitations with both hands while I still can and so went along on my own.  I didn't expect to see anyone I knew but assumed there would be someone to talk to so I went along hoping to have a nice time.  What happened was that I met a kindred spirit and that was so wonderful I've been smiling every since.  She too has been through rough times but has come out the other end smiling and with a determination to make the best of life.  She wasn't fazed by my attitude to our situation and seemed to understand instantly why I was being so positive.  A telling point came when she asked me about the dementia and then looked straight at me and said 'you need to be very independent to do this'.  Having been let down a few years ago by a group of people I thought of as friends I have found it quite difficult to let new people into my life ever since but at this small gathering I decided that she is someone I need in my life.  Now this could obviously have gone one of two ways but I've asked if we can get together for a coffee in the New Year and she thinks this is a good idea so obviously thinks I'm a fairly safe person to get to know.  Watch this space to see how the new friendship goes. 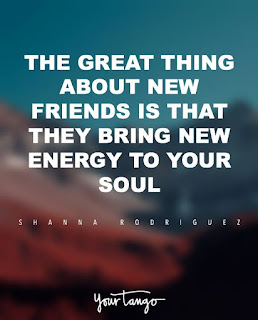