December 06, 2018
I read, and have written, a great deal about the importance of patience when living a life affected by dementia but have noticed recently that I have to bite my tongue far less frequently than I used to.  I can't remember the last time I left the room to avoid an argument or to extricate myself from one of those circular discussions that used to be a fact of life and I really don't remember any arguments breaking out in the middle of a shopping trip (which is in itself a small miracle) so I started to consider why this might be.  Jake will tell you that I am probably the least patient person he knows and I really did find it all such hard work in the beginning.  I have always been the first to fight my corner, to become exasperated when things didn't go my way and to feel uneasy whenever something wasn't done as I thought it should be.  The last few months however have seen life slowing down and seen me thinking before I speak or act and this has made so much difference, and here is the amazing part, not just for Ash but for me as well.  I no longer spend my days racing from one thing to another, I rarely (but notice I'm not saying never as I'm most definitely not a saint) get exasperated over trivial things and I absorb far more of what's going on around me.  I've also seen that the more relaxed I have become the calmer Ash is.  Common sense tells us that people with dementia feel frightened as they understand less and less of what's happening in their lives but as long as they can be assured that someone is in control they are better able to cope.  Ash knows now that he can rely on me to not only organise things but to do it around him.  For example I choose our holidays but only arrange ones that he will like and feel comfortable with; I arrange nights out with friends but only in small groups so that he's not overwhelmed; he knows he's under no pressure to go somewhere he won't know anyone or join in large events where he will feel out of his depth.  I love the fact that he knows all of this and that he trusts me (almost) completely.

On top of all of that everyone in the village is aware of how Ash struggles and makes allowances which means again that he has no need to feel anxious.  There are no strange looks when he says or does something random, no-one feels a need to hurry him along and people listen to what he has to say.  All of this has given him a new found confidence which means patience on my part or anyone else's is rarely needed.  I keep saying that strategies are the way forward and this realisation that I rarely find my patience being tried shows just how important they are. 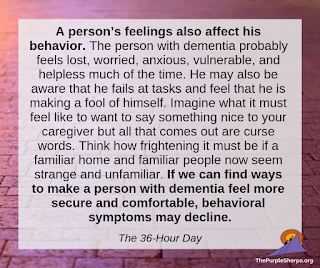