Acceptance is the key

January 23, 2019
Whenever I'm driving around the county for work or when I find myself lying awake in the middle of the night I think about what's happening to us and what's changed because of it all.  A few days ago I was doing just that (driving around the county rather than dealing with a bout of insomnia) and decided that the further we get from how things used to be when were living a 'normal life' the harder it is to remember what that life was like.  Then I realised it's not because we're further away from normality but that we have a new normality which has come with acceptance of our situation.   Ash was in the police force all his working life and several years ago, when Jake was quite little, he was accepted for a particular job role which involved the possibility of him being away from home during the week.  The thing was that he had no idea when or even if he would need to be away and probably wouldn't until the very last minute.  We talked about this before he applied for the job and decided that we could cope as long as we all assumed that he wouldn't be home Monday to Friday. That way I wouldn't organise anything for us as a couple or as a family which would in turn avoid disappointment and irritation on anyone's part (particularly mine).   He had this job for around 15 years and that mindset got us through all of it including the time he went up to Scotland for 2 days and ended up being away for 2 weeks, the time he was supposed to be home for a New Year party at our house but didn't return until 9am the following morning or the time he'd promised he would finish work at lunch time on Friday as we were going away for the weekend and then phoned me at lunch time to tell me he had indeed finished work but was still four hours drive away.  This I think is the same.  I have different expectations of our life now than I had before.  I know he can't make decisions, I know he can't be relied on to make sure something happens and I know he may be there in body for me to lean on in times of difficulty but the reality is that I can't even let him know I'm worried as this makes him anxious.  Knowing all of this doesn't always make life easy but it does bring with it a reality that's workable.  If I spent my life remembering how things were I think I would go completely mad. 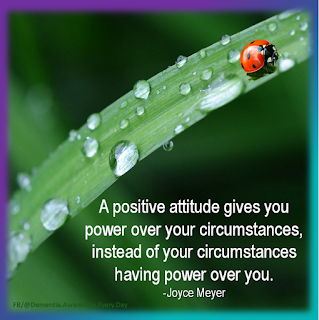 Lesley said…
Your 'normality' may be different now but it is a development from what has been, and to have had that is a huge blessing. In my mind, knowing that those achievements/experiences/challenges have been there and have created a rich and varied life might be helpful in accepting this phase as a 'gentler' time?
23 January 2019 at 18:11