Advice from a different perspective

February 06, 2019
A while ago several friends told me they'd heard someone called Wendy Mitchell on Radio 4.  She had been diagnosed with Early Onset Dementia at the age of 58 and talked eloquently on the radio of her life, the adjustments she made and how she continued to live well with that dementia.  The friends all suggested I read Wendy's book 'Somebody I used to know' and I nodded and made the right noises however in my head I didn't see how reading a book written by someone on the other side of what I was experiencing could help.  The last two days have been spent reading that exact book and what a revelation it's been.   I have spent the past 11 months watching Ash, observing what makes things right with his world and what sends him into a downward spiral and I've made sure I've learnt from these observations but reading Wendy's book has given me a far greater insight into how he feels and what he's experiencing that I could ever have imagined while lots and lots of things have fallen into place.  I didn't realise how sporadic his crises could be which sounds silly when I write it down but I thought this would be a gentle change and all in one direction.  For example on Monday we'd had a great day;  lots of fun, laughter, people-watching, swimming and sunshine.  We'd watched a film in the evening which Ash had followed and commented on and then I switched the television off and all of a sudden he went into freefall.  No idea where we were or why we weren't at home.  I gave him the information he needed leaving him to process it in his own time and then 10 minutes later his world had righted itself and we were back on track.  This then wasn't a gentle change (it hasn't happened since) but neither was it what I would call an aberration.  It obviously wasn't going to be a one-off but neither was it going to happen every hour or even every day at least not for a while.  Wendy's book explained that so clearly and showed me what to do in that and other situations.  I've now signed up to her blog https://whichmeamitoday.wordpress.com and it's so nice to see yet more evidence that a diagnosis of dementia doesn't have to be the end of the world as we know it. 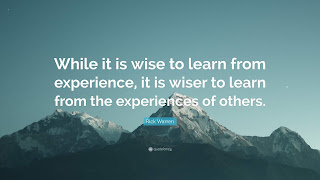 An important lesson in however much you think you know, you never know so much that you do not need to listen to those of us who are living with it
6 February 2019 at 19:40

Wendy Mitchell said…
That’s so kind of you, thank you. Sending you and your husband lots of best wishes and hugs...Wendyxx
6 February 2019 at 20:11

Jane said…
I don't think I ever thought I didn't need to listen to those living with it but there aren't many of you writing about it so those views are hard to find (or maybe I'm just not looking in the right places). I also know I've still got lots to learn but it was so nice to find I'm on the right track.
6 February 2019 at 20:15

Sarah H said…
Didn’t expect you to be blogging on holiday 🙂 but glad to hear things are going OK. Now I want to read Wendy Mitchell’s book! Enjoy the rest of the sun and bring a bit home, please . . .
6 February 2019 at 23:17

Jane said…
You are very welcome Wendy. I have recommended your book to lots of people now including my son so he has some idea of what's going on his dad's head. It was so helpful to see it from the other side and I know from what I've heard that everyone who's read it feels the same. Thank you for reaching out to us all.
16 February 2019 at 17:24