Dementia is catching in this house

February 14, 2019
I do know that dementia isn't catching of course but three days ago I bought Ash a valentine card and I can't find it!  I didn't expect one in return as he's failed to mention the day and managed not to see all the reminders in every shop we've been in but I really wanted him to have one from me even if it was just to let him know that in the depths of his struggles I still love him.  I was very proud of the fact that I'd found one which wasn't sloppy and I know I got it home and secreted it somewhere in the house so that I could present it with a flourish this morning but I now have no memory whatsoever of where that secret place was.  I've wracked my brains and definitely have a picture in my head of removing it from the bag but the rest is a complete blank.  This has shown me two things  the first of which is that this is something Ash goes through on a daily basis but, unlike me, he can't laugh it off or make a joke of it knowing that it's almost certainly a one-off.  The second thought is that I know the reason it happened is because my head is so full of 'stuff' that some of it must fall out and lay by the wayside just to make room for other things.  This then must be what Ash feels like when he has sensory overload.  There is only room for so much in our lives and in our heads.  One great reason for slowing down, simplifying life and going with the flow. 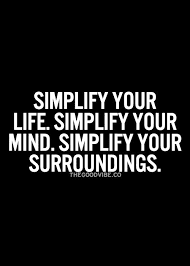