It's the small things that you notice

March 13, 2019
Most of the time, because we have strategies in place, Ash's dementia isn't too apparent.  In fact at the weekend a new friend said 'he doesn't have it very badly does he'.  She then looked at my face and said 'or is it that you manage it well'.  I'm actually quite proud of the fact that she thought he didn't have dementia very badly because at least it proves those strategies work and I have to admit that I do sometimes forget what's happening to him.  But then something quite insignificant happens which brings it all flooding in.  Yesterday it was when I had the phone call saying that the light was flashing on the answerphone (which we've had for around 10 years) and asking what it meant.  I explained that someone had left a message and he could listen to it.  That worried him.  If he listened to it and the light stopped flashing did that mean we wouldn't be able to listen again and the message would be lost?  And this was the man who used to leave amusing messages on that very same answerphone just so that people would smile when they listened!  Actually that message was left by someone who wanted to arrange a home visit to my mum but who didn't leave her name, where she was calling from or how I could contact her and I'm assuming she doesn't have dementia!  Anyway the answerphone scenario let me know that changes are afoot in Ash's brain.  The next thing that made me realise things are different was when, at 9pm, I realised the milk was off and I, not Ash, would have to go and get some.  To some of you that will seem trivial but not when you live in the wilds of Lincolnshire.  Several years ago a friend from London was staying with us when someone she knew phoned to tell her about a job he thought she'd be interested in.  He said he would fax (how quaint) the details to her if she'd let him have a number.  Her reply?  'to give you some idea of life here I will tell you that in 10 minutes I'm going to get on a bike and cycle 5 miles to buy some ham.  I have no idea where the nearest fax is'.  Life hasn't moved on much even now so in order to buy milk at 9pm I had to get the car out and drive those same 5 miles.  This really was the last thing I wanted to do after spending the day chasing around for my mum and in the past I wouldn't have even had to think about it.  If only I'd appreciated that fact.  The other small thing I noticed however (and this was a 'good' small thing) was that as I walked in the door Ash was waiting with outstretched arms all ready for me to walk into.  Dementia hasn't destroyed his ability to know that after a day visiting my mum in the new hospital and not getting home until 8pm I would be in great need of a hug.  I'm also fairly sure that if I still drank alcohol he would have had a glass of wine waiting for me too.  That's love for you and it's the reason we're in this together. 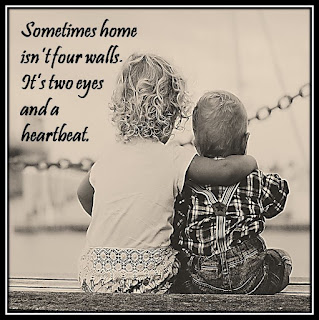 Ann said…
Thank you so much for this post, Jane. Reading this makes me feel, I’m not alone. There are times when even I think the Doctors have made a mistake, with their diagnosis, and it’s often difficult for others to understand what you are both going through. Especially, when my beloved is in his Oscar winning ‘host mode’. But then the ‘switch’ is turned off, and you see the Dementia at its terrible work. Nevertheless, there are still those beautiful moments when my lovely man is ‘back’ and I cherish those moments beyond words.
14 March 2019 at 07:52

Jane said…
I think the hardest time is when we've been in a prolonged good spell and I really do start to forget. That's usually the point where I forget the strategies that got us to that point in the first place and everything comes crashing down. It takes me by surprise every single time and I find myself catching my breath and trying very hard not to cry. So no you're not alone and that's a good thing to know I think.
14 March 2019 at 10:03