Giving up is not an option

May 01, 2019
I've been running in the forest which is very exciting (although when I say 'running' I actually mean 'gentle jogging' but still it's exercise).  Since I went over on my ankle the running has been a little sporadic.  I'd reached run 2 on week 6 and was feeling very pleased with myself but then took a 2 week break to get over the trip then decided to start at the beginning of the programme which was ok the first run but then a little boring, then the app didn't work, then I got onto week 3, then the app didn't work and I became quite dispirited.  I may have said this before but if I can't do something easily my default position has usually been to give up and for a while the decision hung in the balance so this week was my 'begin again' chance, the ideal opportunity to put on the trainers and get out there.  You may remember that I began when we were in Florida where it was sunny and warm then we came home and running without looking out for alligators and snakes seemed a little tame.  However we live in a beautiful part of the country and the views from the top of the lane kept my mind off the lack of breath.  The thing was that it was the warm-up walk which got me to the top of the hill and all the running was on the flat, still I was running and that was the main thing.  Yesterday while walking in the forest we came across a 5k running trail and I felt a frisson of excitement.  I was doing the 'Couch to 5k' programme so in my head I'd already run 5k.  This would be fun but to make sure I didn't get lost when I went out on my own we decided to walk the trail first.  What did I learn?  That 5k is much further than I realised and that at no point have I ever run that far!   I was still determined however to run at least some of it and was really looking forward to it.  This morning then saw me set off full of enthusiasm and, although I didn't do the whole route and walked some of it, I'm still proud of myself for the distance I did manage to cover and the fact that some of it was uphill (think slopes as opposed to hills though).  Cut to this afternoon and I'm typing this while unable to move a single muscle.  Think I might have overdone it slightly but at least I did it so those days of giving up easily may finally be in the past which is just as well really. 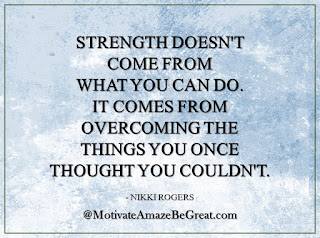 Ann said…
‘Whatever doesn’t kill you, makes you stronger’!

Isn’t it fascinating that the journey to increase physical strength, mirrors an increase in good mental attitude. Well done Jane...

Now where did I put that gym kit? 😉