Living in a parallel world

May 04, 2019
Sometimes I think I know how Alice felt in Wonderland and just now was one of those moments.  Jake and I, along with the 5 year old, went to see my Mum today.  She's safely ensconced in her new care home (the one with the pub and the cinema) and each time I've been to see her I've had to interrupt a conversation she's having with someone.  Today was no different, she was chatting away with a broad smile on her face and all was right in her world.  We went through to the 'pub' and got toys out for the 5 year old then settled back ready for her to tell us what she's been doing.  The first thing she said was 'Can you book me back into that place I've just left, it's boring here and there's no-one to talk to'!  Luckily I'd spoken to one of the girls on the way in and heard that Mum had been out for coffee (Costa and Cafe Nero) three times in the ten days she's been there and had also been into town  so there's little chance she's been bored.  I pointed out that she was bored at both the previous homes she'd been in and she'd been equally bored if not more so when she'd been at home on her own so she soon settled down and joined in the conversation.  So that was my Mum.  I got home an hour ago and told Ash all about it which made him laugh (my trials and tribulations with Mum are almost guaranteed to bring a smile to his face) but then I obviously said something wrong.  I've no idea what it was but something provoked the storm cloud which gathered on his brow and suddenly I'd done nothing but criticise since I walked in the house, nothing he did was ever right and just because I'd had a bad day I'd taken it out on him!  Those are my parallel worlds.  There are three of them - Ash's, Mum's and mine.  I'm fairly sure mine is the true world but what do I know? 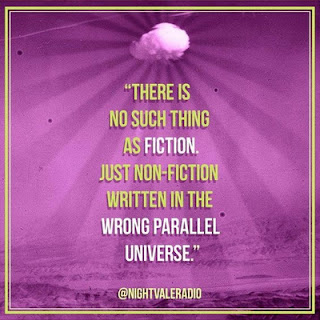 Ann said…
So true, Jane. I keep saying to my closest friend (who knows me better than I know myself) that I feel as though, something took me whilst I was asleep and when I woke up I was on a planet that I didn't know, nor understood the first thing about. At first it was nothing short of terrifying, but gradually (as you have found Jane) I began to adapt and dare I say, relax.

Ha! that's just the moment when something I've said or done (or not done) sets off an unexpected reaction in my beloved, leaving me bewildered and surprised. However, my secret weapon came from watching the Teepa Snow videos. I take three very deep breaths, and carry on as if his reaction had not occurred. Or, I walk away for a few moments. Nine times out of ten, the upset is quickly forgotten.

But, even though I can mostly handle these situations (at the moment)... They still never stop taking me by surprise!
5 May 2019 at 08:57

Jane said…
It really is good to know I'm not on my own. Mostly when it happens I'm instantly on the defensive as I know that if I'v done or said something to provoke the reaction it was totally unintended but that defensiveness never works and I really do need to learn to walk away which is what I did last night and it was all over so quickly I began to think I'd imagined it.
5 May 2019 at 09:46