The joys(?) of housework

May 05, 2019
The question mark in the title of today's blog is there because I would never in a million years have thought of or described housework as joyous in any way, shape or form.  It used to be something Ash and I did together when things became desperate.  Maybe we couldn't find space for a plate on the kitchen table or we looked at Jake's knees when he was crawling and realised that the floor needed washing or we couldn't open the door on his playroom and realised that something had to be done.  Admittedly as we all grew up (Ash, Jake and me) things did get better and on the surface the house usually looked relatively clean and tidy and no-one ever got food poisoning but still it wasn't ever something either of us looked forward to.  As mentioned at the beginning Ash and I used to share it then he got to the point where he would hoover and mop if I asked, then he would hoover or mop and recently he's panicked if asked to do anything in the house at all.  As you'll have noticed if you've been following this blog life has been hectic recently and cleaning has been at the very bottom of my list.  As it wasn't even on Ash's radar things started to slip but now there is lots and lots of time and so this morning I started at one end of the house and worked my way through including the dreaded kitchen table which is always piled high with letters and envelopes, some dealt with and some not.  Ash joined in the fun by shredding to the point where I think he's blown up the machine and (almost) all is now clean and tidy.  It smells wonderful, we can see surfaces, the painted floors are gleaming and I feel so much better.  There's still the office to do but that is an ongoing project as I gradually turn it into a quiet space for me to retreat to when I need to clear my head but other than that this has been a great start to my semi retirement (and I really can't believe I just said that).  Now I just have to keep it this way. 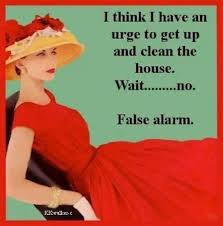 Sarah H said…
I have to admit I’m not a great fan of housework either - but I do feel a certain sense of achievement after doing some . . . On the other hand, it has to make a difference to be worth doing!
5 May 2019 at 23:42

Jane said…
There was definitely huge job satisfaction yesterday.
6 May 2019 at 06:22