Knowing when to draw the line

June 29, 2019
Against all advice and everything I've learned over the past 18 months two days ago I was shouted at once too often and discovered where my line in the sand was.  We're told to go with the flow at all times, to agree with everything and to walk away from hurtful comments knowing that they're not meant and that our person with dementia has no control over the things he or she says but is that really true every single time?  I've noticed you see that a couple of times Ash has been about to bite my head off over something I've said and then, realising there were friends around, stopped himself and just agreed with me or ignored whatever it was that I was saying or doing.   For a while now I've done exactly as I've been told,  I've walked away from confrontation; I've agreed that I've been wrong and I've attempted to change the subject and lighten the mood only it's rarely worked and over the past few weeks the whole thing has moved into a downward spiral to the point where I didn't say anything in case it was wrong and provoked an outburst and we ended up living in a silent house.  Now I know that anyone with dementia has low self-esteem, I understand that they are frustrated and I realise that they are frightened but there was something about this that nudged at my memory.  Over the past 20+ years I have managed three nurseries and worked with children in a number of other roles and I began to remember those children whose parents, rather than instilling any form of discipline (and I use that word loosely), tried rather to appease in order to avoid a tantrum.  As a consequence, the children were constantly trying to work out what the rules were and in order to do that they needed to push further and further to see where their boundaries were until family life was in chaos.  At nursery we set boundaries, not strict ones but boundaries none the less, so that the children knew what was expected of them and they knew how far they could go with their behaviour.  They learned what was acceptable and they also felt safe just because those boundaries were in place.  The result was a calm and orderly environment where everyone rubbed along, children rarely fell out and they were able to control their feelings.

None of this was actually going through my mind in the one instant that pushed me over the edge but I realised that I was totally miserable and there had to be a better way of living which is exactly what I said.  The discussion took a while as everything has been my fault for a while now and also the fault of this enemy, dementia, in fact Ash it seemed had taken on board the whole idea that nothing was his fault and that he couldn't help any of it.  That was until I pointed out that it only happened when we were on our own.  I didn't expect him to remember the incidents of course but it didn't alter the fact that he can stop himself if he wants to, that he's not so far down the line that he has no control whatsoever.  As a result of that conversation there have been three times this morning where I have seen/felt him get himself under control and we're both so much happier.  He knows where the boundaries are, I am able to comment without worry and we are starting to smile at each other again.

So I agree that in most cases and at most times it's better to agree, that it's better to avoid arguments and it's certainly better to keep calm and carry on as much as possible but sometimes you might know your person with dementia better than the experts and it's worth keeping an eye out for the time to draw your line, state your case and not feel bad about it. 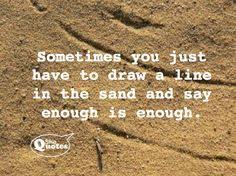 Lesley said…
It sounds like you judged that perfectly and letting Ash know that you don't believe he is incapable of control is good - it shows you still have faith in his abilities and so should, logically, give him a boost. Well done!
29 June 2019 at 18:53

Sarah H said…
I’m sure that ‘one size doesn’t fit all’ is just as true with dementia as with anything else. Well done you for following your instinct; another good lesson for others.
29 June 2019 at 18:58

Jane said…
It's so hard to know what's the result of dementia and when he's just been bloody minded especially as he was never like that and I realise I don't know him as well as I used to. One more thing to put down as a lesson learned.
29 June 2019 at 22:47

Ann said…
THANK YOU SO MUCH (yes I am shouting!) Jane, for writing this post!

Not that I worry what others think, but I now feel totally vindicated in ‘drawing MY line in the sand’ for my beloved (which I’ve sadly had to..
several times)

I do understand the ‘experts’ advice on the ‘ideal’ way to handle some of the things we have to deal with, but I take issue with being told that people with dementia (especially those in the early stages) cannot help themselves regarding the hurtful things that come out of their mouths or equally hurtful behaviour. I think we know our loved ones well enough by now, to know when we are being deliberately ‘wound up’. Even if it isn’t deliberate, it’s still better all round for them to know what is acceptable, and what isn’t.

The fact that ‘peace now reigns’ once more is proof enough that you are totally justified, in drawing that line, Jane.
30 June 2019 at 14:20

Jane said…
Thank you so much for this Ann. have just gone on my fb page and there is another of those posts from a dementia site telling me to put myself in his shoes etc but I do think I know the difference between when he's being difficult because he's anxious or his self-esteem is low and when he's being difficult just because he can. Now I just need to learn how to react to the 2nd one without starting world war 3.
30 June 2019 at 17:20