Is it a decline or not?

July 21, 2019
It's the smallest things that make you notice the decline.  I've mentioned before that Ash used to do the weekly grocery shop then he drew up the list and we shopped together then he drew up part of the list, I finished it and we shopped together, now he thinks he draws up the list but actually I do it and we shop together but occasionally he stays in the car while I shop.  Then there's the mowing.  For years and years Ash mowed the churchyard and church field at the front of the house and took great pride in it looking neat then it all got too much and he did it occasionally then I asked our neighbour to give him a hand then the neighbour was doing more than Ash now he and his wife do all of it while Ash doesn't even notice the change.  Ash used to mow the lawn to within in inch of it's life then I had to remind him, now I remind him but have to ask if he wants me to do it.  Sometimes he says yes to that!  So there are these things and lots of others but the dishwasher is the latest.  Ash used to do everything around the house (and yes I do know how lucky I was) but eventually all those jobs dwindled until I found myself doing it all except for emptying the dishwasher and Ash always did that in a morning when he'd cleared and tidied the kitchen.  Over the last couple of weeks however more than once I've gone to get a mug and realised they're all still in the dishwasher along with the other clean pots from the night before so I start to empty it and he walks into the kitchen and doesn't even notice that there's something he missed.  So there is a definite decline BUT, just as I'm starting to feel a little despondent, today I was out in the garden working hard to uncover a path that I knew was somewhere under the weeds when Ash joined me and started to tidy up the edges of the part I'd uncovered.  He's also taken measurements of an area of decking that has needed replacing for a couple of years and apparently is going to start that this week and then against my better judgement I begin to doubt the decline.  Is there any wonder that living with dementia is often likened to riding a roller coaster? 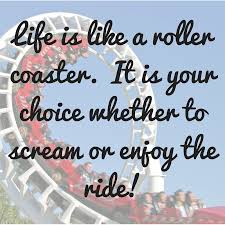 Ann said…
Yep....that all sounds like ‘par for the course’.

As we are a little further down the road, I have to report that you may end up doing absolutely everything Jane.

It’s happened to us and it became so exhausting that I took on a cleaning lady to help me in the house once a week, and a gardener to assist with the bigger clearing jobs once a fortnight.

Yes, I’m fortunate in that we can afford it (actually we use the attendance allowance to pay for the work). But it’s money well spent, and has saved my sanity.
21 July 2019 at 20:13

Jane said…
I think it's the bigger jobs that concern me. At the moment Ash can still cut down branches from the trees, dig the garden, chop the logs etc but I'm not sure I have the strength needed for those but have decided to worry about it when the time comes. For now the extra jobs are creeping up on me often without me realising and I have so much extra time with mum in a home and barely working (6 hrs a week). In fact looking back I'm not sure how I ever managed to fit it all in.
22 July 2019 at 07:47