life is sooo up and down

July 28, 2019
I think I'm in danger of getting motion sickness.  Ever since I drew the line in the sand, with one or two exceptions Ash has generally been quite happy but those exceptions always take me by surprise and so it's been this weekend.  Yesterday was really lovely.  We both went, along with Jake and the five and a half year old, to see my mum in her new home.  This is a major step forward as up to now Ash has always become so anxious at the thought of visiting my mum that I've stopped suggesting it.  Yesterday lots of things combined to make it a viable option - it was pouring with rain so he couldn't get on with anything and would have been sat at home on his own, it was a chance to see the five and a half year old, it was a chance to see Jake (although not quite as high on the list as the little one he does come in a pretty good 2nd) and his level of self confidence seems to have soared after successfully replacing the outside light and putting a new floor down in the log shelter this week so off we went and a good time was had by all.  Ash even managed to answer questions fired at him by my mum who hasn't been on the 'dealing with dementia' course and doesn't know that asking questions is the worst thing possible.  Today, in answer to the rain, he's put a washing line under the veranda at the back of the house so, theoretically, I can now dry clothes even in bad weather and he's tried to mend the tumble dryer, without success but only because it's kaput not because he didn't know what to do.  In short, over the past seven days he's been more like his old self than I've seen him in ages but then an hour ago he changed and the thunder clouds began to descend.  I've no idea what it was all about and it didn't last long but it showed once again that there is no relaxing here in Dementia Land as the one thing you can be sure of is that if you're on an 'up' it will most definitely be followed by a 'down'.  The only unknown is the length of time between the two.  Now I do know that there are people out there for whom this is a normal way of life and I've acknowledged that before but this was never our life and it's taking some getting used to. 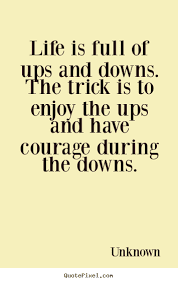