Taking pleasure in the small things

July 19, 2019
Yesterday I wrote about how the old Ash loved nothing more than being outside as often and for as long as possible whereas the unpredictability of nature now seems to make him anxious.  A comment from a regular reader of the blog says that she too is in a similar position and that, just like us, yesterday was about adventures whereas today is about finding pleasure in the here and now and that is just what I've been doing.  The five and a half year old is coming to stay at the end of August and his bed needed a new mattress (the one he'd been sleeping on was bought for Jake when he was about the same age which means it's 27 years old).  We got rid of the old one and since then have been waiting for me to get around to ordering a new one so the bedroom itself has become a dumping ground.  Anyway the new mattress arrived a couple of days ago and today I put the bedroom back together.  I need you to focus now and picture what I'm about to describe in your mind's eye.  The new mattress is much deeper than the 27 year old one so that's one thing, then there is the mattress topper which I'd bought for mum when she was in the nursing home before this one and had a really uncomfortable bed.  She only slept on it for 2 weeks and it seemed a shame not to use it so onto the really deep new mattress it went; then there was the mattress protector which I'd bought to try and improve the comfort of the 27 year old mattress and, again, it seemed a shame not to use it; on top of that went the waterproof sheet which the five and a half year old doesn't really need but you never know; then there was the sheet and by then it was starting to look like the bed from 'The Princess and the Pea'.  By the time the pillow and duvet were on it could all have been used as an extra in the film of the book and we're just hoping he doesn't suffer from vertigo.  With each new layer my smile grew wider and the thought of his face when he sees it made us  both laugh out loud.  Will report back when he's used it as his comments are often 'to the point' and it'll be fun to see what he makes of it all. 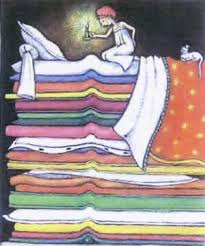