The importance of socialising

July 20, 2019
We used to go out quite a lot.  Nothing fancy but the village pub on a Friday night was a favourite, parties or meals at friends houses were lovely, local fundraisers whether coffee evenings in the village or balls in the local town where we donned the glad rags and ordered a taxi just so that we could drink the bar dry were fun, hosting BBQs or paella parties in the garden kept Ash busy cooking ....... all of these and other events played a huge part in our lives but gradually, and almost unnoticeably, dwindled until  I found we were spending much of our time at home just the two of us.  I couldn't figure it out at first.  We had been involved in organising many of the fundraisers, we hosted some of them and almost had it down to a fine art.  We knew what food to provide, where to get the band, what to do if it rained, where to place the tables, all of these things had been learnt over the preceding 30 years and I couldn't quite put my finger on the point when it all began to change.  Last Christmas however saw me at the village carol singing on my own as I realised it wasn't just that Ash didn't want to go but that the very thought of mixing with lots of people sent his anxiety levels into the stratosphere.  I decided there and then not to push it but just to give him the option to stay at home and it seems to work.  Some things such as village coffee mornings he'll go to but generally only stays a short while and then takes himself off home, others such as a recent village Race Night he'll summon the energy for because we've helped organise those in the past and he knows what to expect; the wedding a few weeks ago he made a huge effort for because he knew it was important to all of us and he's not so far down the road to dementia to fail to understand that.  Other events however just make him anxious and I've realised there is so little benefit to him taking part that he's better off at home.  I however am most definitely not better off at home so yesterday afternoon saw me visiting a friend for a catch-up and organising with her to go to the pub next Friday night for an almost forgotten night out; last night saw me at friends for a meal which we'd both been invited to but a look of panic had passed across Ash's face at the first mention of it so we wrote it in the diary on the understanding that if he didn't want to go he could stay at home with the dog and I warned the friends that it might just be me. Turned out he wanted to stay at home with the dog but that was fine, I knew two of the three couples sitting round the table and didn't once feel out of place.   Dementia in general and anxiety in particular make life very difficult for Ash, he struggles to follow conversations, he's unable to relax if he doesn't know what to expect and sometimes it's just more comfortable for both of us if he stays behind but I've come to realise that I'm OK going to things on my own and, although I would prefer to be sharing the experience with him, dementia means that even if he comes with me there is little sharing going on.  If you too are in this situation and are worried about going places on your own I suggest you give it a try.  The first time will feel odd, the second will be easier and after that you might just find that you don't mind at all. 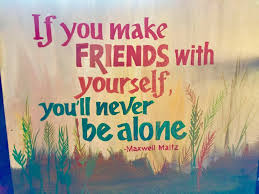 Jane said…
It's so easy to sit at home just because it's easier or because you think people will look at you oddly just because you're on your own isn't it. The fact is that the more you go out on your own the easier it gets. I know there will come a time when Ash can't be left but at the moment he can so I might as well make the most of that.
22 July 2019 at 07:43