August 18, 2019
Friday was a day of 'Ds'.  Dreadful, disastrous, debilitating, dark, daunting, damnable - I'm sure you get the idea.  The whole car crash of a day began with me commenting on some logs Ash had been to collect from a neighbour.  That comment was taken as a criticism (and I still have no idea why) and we spiralled into crisis from that point.  Once again everything was my fault, once again I was accused of never listening to him and once again I left the house just to get away from the shouting.  I walked down to the church and let myself into the porch where I could be out of the rain and retreat into my head.  Once I'd settled myself and gathered my thoughts I got up to leave and that's where everything descended into farce as I found myself stuck in the porch.  Well that'll teach me won't it?  If I'd retained an ounce of common sense I wouldn't have been in this situation in the first place, I would have calmed Ash down (or maybe even avoided making him cross in the first place) and I would be in the warm and dry having my lunch.  Instead, as I took hold of the door to get out I heard it click even more firmly into place.  At first I felt a minor flutter of panic but this isn't the big city where there are padlocks and bolts on everything so I made myself be still and looked at the mesh in front of me.  The handle was on the outside but there, in a corner near that handle, was a tear in the mesh which made me realise that I wasn't the first person to find myself in this situation.  I managed to prise it away enough to be able to get my hand through and then grasped the handle from the outside.  I turned it, pulled the door at the same time and it opened!  The downside was that I now had to return to the house and face the disaster I'd left.  Got back in to find Ash waiting with an apology for upsetting me which should have made everything right but, because I know he can't help it, just reinforced the knowledge that I really should have known better.  The thing that he doesn't realise is that I wasn't upset because he'd shouted but because that shouting showed how much we've lost.

Anyway on to better things.  At the end of the day I met up with friends for an evening of Blackadder at the theatre with a meal half way through.  Humour, conversation and food - what more could I want to restore my sense of self which goes missing far too often these days.  Then yesterday two more friends joined me to help clear out mum's kitchen.  I may have mentioned before that I have the attention span of a gnat and am naturally lazy into the bargain.  Having friends to keep me on track and make me focus on the job in hand helped beyond imagining and, with their hard work, the kitchen now has clean and empty cupboards, we've started on one of the bedrooms and the lawn was mowed.  Came home with a real sense of achievement and 'D-day' a distant memory.

'Thank goodness for friends' is a phrase I can't use often enough. 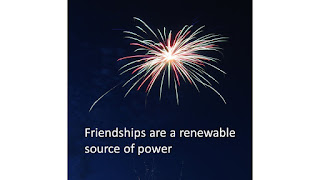 Lesley said…
I love it too - isn't there a Beatles song that is appropriate at this juncture?! I hope you're having a giggle at the porch fiasco by now - reckon you can dine out on that for a while! xx
18 August 2019 at 19:33

Ann said…
Oh bless you Jane, you are much too hard on yourself sometimes.

‘Walking on eggshells’ with regards to Ash’s feelings (or anyone elses’s for that matter) cannot be sustainable 24/7. What about your feelings? You are important too. I’ve found from experience that it’s not always the best idea to try and calm someone during an altercation (wether big or small - Dementia or not). Despite getting “locked in the porch”, you did the right thing, walking away.

Thank goodness you’ve still retained your sense of humour, and “yes, thank goodness for friends”. Friends and laughter are the best medicine there is. 😃
19 August 2019 at 07:31

Jane said…
Most definitely Ann. Those two things help me to stay sane and goodness only knows where I'd be without either.
19 August 2019 at 17:56