A drama queen in the making

August 06, 2019
I know I'm not the only one with sole responsibility for someone, there are many others in the same position, but the fact that I'm the one responsible for Ash and knowing he couldn't cope if I wasn't there is really only just starting to dawn on me and in the process I've realised that I'm in danger of becoming a drama queen.  In our house we've always brushed off illnesses (ask Jake how many times he was sent to school with the words 'you'll be alright it's just a .......' ringing in his ears).  Ash hasn't been properly ill since 2000 and I've been similarly well since I stopped working with small children in 2016.  Now however every ache has me think the worst.  Hands starting to swell?  It's obviously the beginning of arthritis rather than the heat which has always had that effect on me in the past; pins and needles? it must be the beginning of MS rather than the fact that I've been sitting with my leg tucked underneath me for too long;  stomach pains?  it's clearly the beginning of gall stones rather than the effects of eating too much fruit at one go.  See? all the things that in the past I would have dismissed as insignificant now take on a new importance because if there's something seriously wrong with me who's going to care for Ash?  Luckily common sense prevails so I now play a game of 'wait and see' with myself and always within a few hours the feeling (whatever it was) has gone away and I'm feeling fine again.   It's a good job I know myself well. 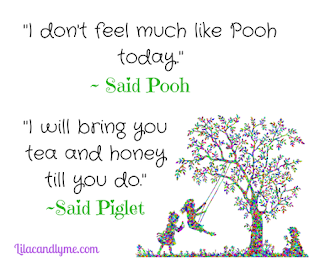 But if the feelings of being unwell continue beyond 24hours, check your stress levels (and take some deep breaths). Stress can creep up on you so easily in this situation. My first warning signs are severe Migraines.....