Another day, another walk

November 05, 2019
At the beginning of the year we went to Florida for two weeks and I decided it would be a good time to start running in order to get fit.  A friend had told me about the 'Couch to 5K' app so I sorted myself out with a low tec (AKA cheap) running kit and set out to lose weight and get to the point where I could walk uphill without getting out of breath.  Running on the track around the resort in Orlando was lovely.  It was warm, the signs telling me to look out of crocodiles and snakes added extra interest and I took to it all quite enthusiastically.  We came home and it was still February however, unlike Florida, it wasn't in the least bit warm but I kept at it until I twisted my ankle in a pot hole.  Two weeks later I started again and all was well but I started to get a little bored.  Now those of you who know me won't be surprised to hear that but you might be surprised to hear that I carried on for a few weeks after the boredom set in and then, suddenly, I came to the decision that I really didn't like running so I quietly stopped.   I didn't tell anyone at the time but recently admitted to a friend who burst out laughing and said I should own up to all of you so here I am.  The thing is that life really is too long nowadays to do things that bore you I think.  We all have difficulties, we all have things we have to do, we all have commitments we can't get out of so if it's free time then, in my opinion, we should spend that time enjoying ourselves.  Now this theory is all well and good and I could happily spend my days out for lunch with friends or watching rubbish on the tv or curled up with a book but the gradually expanding waistline which resulted from these wonderful activities meant I was in danger of having to go clothes shopping which is one activity I absolutely hate so something clearly had to be done.  I thought and thought about what exercise I actually like and decided that walking can be fun and interesting and can be done on my own or with others.  I asked a group of friends if they would join me and we decided to meet at the phone box in the village on a Monday at 9.30am whatever the weather.  If you can't make one Monday it doesn't matter, there's always next week, we decide on the direction to take just before we set off and after 5 weeks it's still fun.  So that's one physical activity a week but there are another 6 days so I've begun to ask other friends if they would like to meet up and go for a walk which is how I ended up in the Lincolnshire Wolds this morning traipsing along a bridle way, through mud and over streams.  I've done this walk before and in my head it would take us 1.5 hrs.  For some reason I'd miscalculated and we arrived back at the car 3 hrs after leaving it.  My feet hurt, my wellies had leaked (and I'm at a loss to know why I wore those instead of my walking boots which are comfy and waterproof) and my legs are still aching two hours later but it was so lovely being out in the fresh air and chatting that we're going to do it again next week.  And next week J is going to remember to set the app on her phone to track the walk and tell us how far we've been (we were halfway round today before she thought of it). 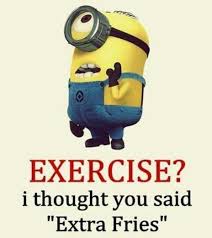 Ann said…
Walking, especially with other like minded folk, is a brilliant way to get exercise. You are so right Jane, it’s important to keep as fit as you can, but it’s equally important that you actually enjoy the activity!

I’ve decided, apart from walking (which my beloved cannot unfortunately join in due to his physical problems) to buy a second hand Weii console with Weii Sports and Weii Fit games included. I’m hoping this will at least get us both moving, and as it’s something we can do together it should, fingers crossed, be something he can cope with and have fun! Wish me luck.
8 November 2019 at 07:05

Jane said…
I've thought about getting one of those so would love to hear how you get on. My problem is my short attention span which means I would use it every day for 4 months (seems to be the max amount of time I can commit to most things - Ash, Jake and the 6 year old are obviously an exception) and then stop leaving it to sit all alone in a cupboard somewhere. You've spiked my interest though Ann so will have another think about it.
8 November 2019 at 09:52