None of us has the perfect life and the one Ash and I are living at the moment certainly isn't one I would have chosen, neither however is it anywhere near as bad as I feared it was going to be.  I would even go so far as to say that, in most parts, it's better now than it's ever been and that has to be down to the choices I've made over the last two years.  When we were first given the diagnosis I thought it was the end of everything, that we were doomed to living in a twilight world dominated by dementia and the things he was no longer able to do but I can say with great certainty that things haven't turned out that way at all.  I know I have bad days where I feel sorry for myself beyond belief but I've realised fairly recently that once upon a time I chose to hang on to those feelings, hug them tightly and wallow in them.  Recently I've felt myself batting them away whenever they've threatened to engulf me and as a result those days are fast becoming moments and even those moments are few and far between.  So what's changed and how? I think it's been the total acceptance of what's happened, the understanding that our future is never going to be the one I thought we would have and the realisation that it's up to me to make the best of what's there.  I really could sit back and let the negatives take over, it would be perfectly possible to think 'Ash can't do such and such so neither can I' and it would be very easy to think that the main thing was to survive on a daily basis.  However, as the quote says, I do have a choice.  We can become the dementia that occasionally threatens to take over our lives or I can find another way for both of us.  I do know how it feels to be in a difficult situation and not see a way out.  I survived that time by getting my head down and working solidly until I was through it but as a consequence there was little time for family or friends.  This time I've realised that's no way to live.  This time I'm choosing a different way so that in 10 years time I can look back and think 'I did more than settle'.  I've said this before but just in case you weren't listening the first time I'll say it again.  Don't wait until you have time, until you're no longer needed, until you can afford it, until you're not so tired, until you feel more settled.  If you want to do something and you have the chance then grab that chance with both hands.  If you want to do something work out how to do it and get on your way.  Don't say 'it's not possible because ...........' Instead say 'It will be possible if I just .......... '  It might not happen exactly how you want it to but if you want to do it badly enough there is always a way.  What's happening in your life may restrict some of your lifetime ambitions (a month long trip to Australia with Ash is clearly out of the question) but, with lots of very careful planning and an ability to think outside the box, there will always be an alternative (with Jake's help a week away to somewhere on my own or with a friend isn't out of the question).  So consider your boundaries/restrictions, see what's possible within them and then go for it would be my suggestion otherwise you really will be settling for your life not choosing it. 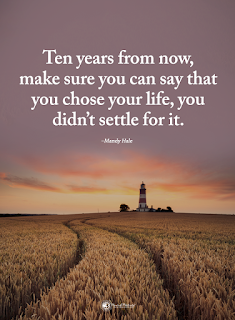 Ann said…
Oh my goodness Jane......this wonderful post has come at just the right time for me! I’ve been ‘wallowing’ again (read ‘feeling sorry for myself’) and really needed these words to motivate myself.

You are absolutely right....Dementia should not mean the end of all our hopes and dreams. It’s an opportunity to think creatively about making ‘happy’ moments for both of us!

dasntn said…
Another "spot on"post, Jane. Live for the moment!

I can do a lot less now than I would have hoped, due to the dementia that my wife has, but there are still ways to have a meaningful life. I guess I am lucky that I have a daughter and brother I can rely on to give me time each week for me to be who I am, and that makes the rest of the time more comfortable.
1 December 2019 at 14:49

Jane said…
I wish this blog would let me reply to each comment separately but unless I'm very quick it doesn't so this will have to do. I've come to the conclusion Ann that what's important now is not just to make happy moments for both of us but to make them just for me as well. By making sure I enjoy life without Ash then, as dasntn says, it makes the rest of my life more comfortable. Last week I enjoyed the long Tuesday walk with my friend so much that I went to sleep smiling as I thought of it. I don't feel as though life is passing me by now just that it's a different life I'm part of to the one I expected.
2 December 2019 at 18:01