December 03, 2019
Someone asked me today if Ash was depressed at all because of his diagnosis.  I thought about that and realised if I'd been asked even six months ago I would probably have said yes but now I really don't think he is.  In fact I would go so far as to say that, at the moment, he's very content with his life and I'm sure that contentment stems from my (very recent) total acceptance of our new life.  Before that all important diagnosis Ash was being treated for anxiety and depression as they have similar symptoms to dementia and I would say that then, and for a long while afterwards, he was anxious and he was depressed.  I also think that both of those were linked to the fact that I was unhappy and he couldn't see a way to change that so it all became a vicious circle - the more anxious he was the less like the Ash I knew and loved he became and the more unhappy I was which increased his depression.  When he was diagnosed with dementia we were both stunned but I was the one that was unhappy because my life wasn't how I thought it should be which made Ash all the more anxious because, for the first time it seemed, he was unable to make my life any better and so it went on.  Since I've accepted that life is never going to be the one I planned all those years ago I've started to look at everything differently.  I've reached out to friends, I've found activities close to home, I'm very happy doing not much at all, I love waking up to the view out of our bedroom window and not having to leap out of bed to get to work and I'm sure all of this is so obvious to Ash that he no longer needs to worry that I'm unhappy, he doesn't have to wonder whether I wish I was elsewhere, there is no concern that he's ruined my life and all of that makes such a difference to him and, consequently, to me.  I keep saying that I'm not a saint and, just in case you were wondering, I'm really not.  I still have bad days, I still get irritated, I still find myself snapping but all of those moments are very, very few and far between and are also situations which are easily retrievable so an ounce of bad behaviour from me doesn't ruin the whole day for either of us.  As a consequence Ash can function better and more often than not, on meeting up with old friends, I get the comment 'he doesn't seem to have it very badly' which I take as a huge compliment.  I feel I keep repeating myself but I want to say again if you find yourself in a similar situation I really can recommend acceptance as the way forward only it does have to be complete.  There can be no half-hearted attempts because you will be found out but if you throw your heart and soul into this, work at it and believe it you will both feel so much better about everything that life will be worth living again. 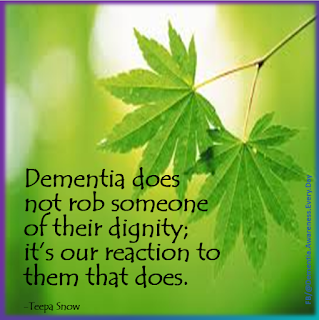