January 23, 2020
No post yesterday as really hectic as well as exhausting.  Difficult start involving a doctors appointment which always causes, at a minimum, a small amount of stress just because we're out of routine.  Got that sorted and then I was off to Mum's house to see about some work that needed doing.  While I was there I found a lovely photo of Ash and me taken about twenty years ago. We looked young, happy and smiley so was obviously way before dementia entered our lives.  I put it in my bag and showed it to Ash when I got home forgetting as usual that excitement and/or enthusiasm are not a great idea in this house nowadays.  He gave me a completely blank look neither responding to the photo or even recognising the people in it so that was a bit of a downer.  He perked up when I suggested fish and chips for tea so we lit the fire and off I went for the 10 mile round trip.  Got there to find myself at the end of a very long queue but stuck it out because I'd made the effort and they smelt soooo good.  Unfortunately when I finally got to the front I'd forgotten my purse so had to come all the way home empty handed which also caused confusion (where were the fish and chips?  why weren't we having fish and chips?  He was so looking forward to fish and chips).  Ended up with salmon pasta which, when everything was calm again, Ash pointed out was still fish and carbs so not all was lost!

This morning I had a light bulb moment.  When we wake up and have got through the 'good morning' - 'what?' moment I usually ask Ash what the time is.  I do this partly because I really struggle to see the clock when I've just woken up and partly because it's seemed to help him feel he can do something I can't.  Recently however his reply has been 'I think it's a bit early to be awake' which has felt odd when it's been just before 7am.  This morning I realised (and I can't quite believe I've been so dense) that he can't put the numbers into a time context.  He's fine with an ordinary clock but with the digital one in the bedroom he sees the 6 at the beginning and focuses on that.  Now can't decide whether to stop asking or carry on as we are until I think it's beginning to distress him.  Your thoughts on this will be gratefully received. 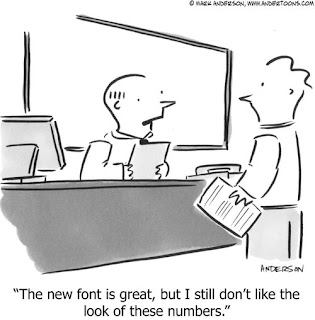 I think you could carry on for now, if it isn't causing him stress.You might find her starts to just read out the string of numbers over time, without any real understand of the time, but he is still being part of doing something useful.

Jane said…
I wish our clock was nearer David. Unfortunately we live in a very old cottage and electric sockets are few and far between, especially upstairs so our clock is on the other side of the bedroom to the bed. Great for when I was working and had to get up to switch the alarm clock off - no danger of over sleeping - but not so good for telling the time as my eyesight gets worse.
24 January 2020 at 08:01