The Mystery of the Missing Dog Food

March 30, 2020
Life has been really calm here over the past week, there's been no dashing around, no driving out to meet friends for coffee, no rucksack packing to go off for a three hour walk, nothing but peace, quiet and a completely laid back attitude which has worked brilliantly as far as Ash is concerned but then came the mystery of the missing dog food.  Max the dog, much to his disgust, is on a diet and so currently has a mixture of two types of dried food.  To make life easier, every few days I fill a plastic container with a combination of the two foods then fasten on the lid where I've stuck instructions on how much to feed him and the days which can be ticked when he's been fed.  That way Ash can still be in charge of meal times but I will know when Max has eaten so both of us are happy.  Max isn't but that's only because he'd like to go back to the old regime where he can eat his tea then sit in front of Ash with large dark eyes pretending he hasn't eaten anything all day.  Three days out of five it's worked hence the need for the diet.  Anyway last night Ash came through to tell me that the plastic container was empty and needed refilling.  I leaped up. took the box, went out to the shed, took the lid off the plastic bin where live the two bags of dog food and stared down at one bag only.  I was baffled.  No-one else sorts out the dog food other than me, in fact I'll go further and say there is no-one else who can sort out the dog food and when I did this four days ago there were definitely two bags in there.  When faced with this sort of situation I rarely ask Ash because there's no point, he won't know and he'll only feel helpless but this time, after turning both sheds upside down I couldn't help myself.  'Have you by any chance seen the small bag of dog food?' I asked as nonchalantly as I could manage.  Obviously I didn't put on a good enough act as he instantly began to search the sheds all over again followed by the freezer, the coal bunker, the drawers in the shed, anywhere that came to hand/mind in fact but still no sign of the dog food.  As usual I gave up searching long before he did but was completely baffled and the only explanation I could come up with was that someone had stolen it.  Yes really.  Someone had crept into our garden during the only period in the 30+ years we've been here when they could guarantee that at least one of us would be home, broken into one of our sheds, opened up an anonymous black plastic bin and stolen a nearly empty bag of dog food.  In my mind that was what had happened so I filled the container with the dog's ordinary food and went back inside accepting that I now needed to buy a new bag of food and feeling very cross with whoever had stolen the food.  Ten minutes later Ash came through saying 'is this what you're looking for?' and there it was, the all important diet dog food.  The frustrating thing is that he thinks he found it inside, he thinks he knows which cupboard it was in but, if he's right, neither of us have any idea how it got there.  I definitely didn't bring it in and if he did then why?  Yet another mystery in the Robinson household which will never be resolved. 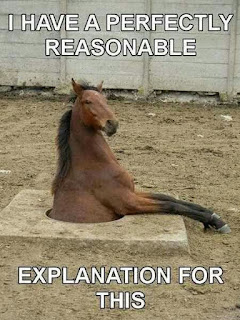