Positive thoughts are the way forward for me

April 10, 2020
I think that when we find ourselves in the middle of a dreadful situation we can go one way or the other; we can look at life in a state of despair or we can try to find the positives.  A few years ago Ash and I found ourselves in a very difficult situation through no fault of our own (except that I'd been too trusting of people I thought of as our friends) and I fell into that pit of despair.  Ash was brilliant and so supportive but I'm convinced now that what happened pushed him over the edge and into dementia.  Certainly we lost 5 years of our lives as we fought our way through it all and when we came out the other side we were changed forever.  When, in December 2017, we were given the diagnosis I did exactly the same thing again but luckily, after three months, I saw the light and decided that there was more to life.  Now there is a point to this post and I promise it's not a political one but this morning I saw one too many posts on facebook pointing out something dreadful about the situation we currently find ourselves in so instead of my morning walk you have this.  There are so many things I want to say that I'm bound to forget some of them for which you'll have to forgive me and you may not agree with some of my points so you're free to ignore those but rather than constantly looking at the bad things that are happening I'd love it if just for a moment we focused on the good or even just considered that there might be another side to a news story.  So here are some of the things I've been thinking over the past few weeks.

Politicians from different sides of the political divide are working together to sort this mess out not just in this country but in other parts of the world.  In the UK we have a new leader of the opposition and almost the first thing that happened after he won that election was a conversation between him and the prime minister where they discussed how they could work together.  Not unconditional support but working for the good of the country.  Can anyone else remember when that happened last?  Apparently the same thing has happened in Western Australia where, a few months ago, that would have been unheard of.  Interestingly the news reports here talked only of how Keir Starmer criticised the government over their handling of the virus but I heard the interview and that was most definitely not the whole story and not even a large part of it.

When China built its two huge hospitals in 2 weeks we jeeringly said 'If they can do it why can't we' but we did and in less time.  We shouted about it a little at the time but then it was back to focusing on the shortages. Why not shout from the roof tops about our achievement?  Any other country would.

News reports talk constantly about how people are flouting the 'stay at home rules' but they rarely gives us the very high percentages of people doing as they're told.  Last night one of the main stories on the news was about the one car the police turned away from the Lake District because two men had decided it would be a good weekend to go canoeing.  There are always going to be thoughtless people in the world but most of us are pretty switched on about this.

There was uproar when Derbyshire police used drones at the beginning of the lockdown to film people walking in the Peak District.  Let's be grateful we don't live in China where we saw film of people being beaten for leaving their homes or Russia where you will be locked away for seven years for doing the same thing.

The government has put in unprecedented financial support for individuals, companies and charities to try and keep us all afloat.  Of course it's not enough, it couldn't possibly be, but at least we have the safety net, many countries don't have anything.  T

Our NHS is obviously something we're very proud of and it's doing the most amazing job but instead of just being very, very, very grateful it might be worth remembering that there are countries out there who don't have it or anything like it.  President Trump announced last week that the US government will pay for the treatment of uninsured citizens but before that announcement how scared were those who didn't have health insurance and for how many weeks have they been petrified they'd get it and wouldn't be able to afford the treatment?  We may be frightened of getting Coronavirus but we don't have that huge financial worry too.

Earlier this week I saw a report on the news saying that MPs had been awarded additional expenses for working from home and people were in uproar.  I don't know the details but I do know that this rule applies to far more people working from home than just MPs.  What would have been more interesting/useful would have been a report on the number of MPs who actually claim these expenses.

A story in a newspaper told how reporters had pressure put on them not to write about shortages in PPE equipment in the NHS but this is reported every single day by the BBC, by hospitals and nursing homes, by everyone who works with vulnerable people so why would authorities even attempt to stem that wave of information knowing it would be futile?

So I know things are difficult right at this moment but personally I know I'll get through it far more easily if I focus on the good that's happening; the politicians working together, the NHS showing itself at it's very best, the numbers of volunteers helping to make sure we get through this more or less intact; the volume of retired doctors, nurses and police officers who've answered the call for help and returned to work, the key workers who are still going to work in order to keep the country running and most of all the number of people who are staying at home however difficult they may be finding it in order to play their part in bringing this all to an end.

My most depressing thought however is the knowledge that, as soon as this is over, the blame game will start so I think I might extend our lockdown indefinitely. 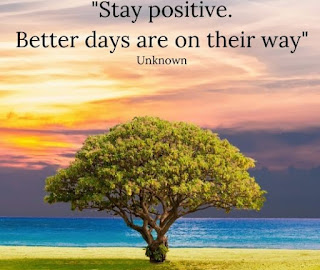 dasntn said…
Jane
I think you are right. Although the disease is terrible, and the deaths are all so very sad, I think we have seen a lot to be proud of during these difficult times. Well said!

Jane said…
Thanks David. I usually try to avoid this sort of thing but I'm tired of everyone being so negative when the vast majority of us, including the politicians, are doing our best. I do think good things will come out of this in the end but we have to stay the course.
10 April 2020 at 22:43

Cornwall Girl said…
Thats very interesting Jane. We had a very difficult three years within the NHS before G began to show some symptoms. Your post has made me consider if the huge stress was responsible in any way for the resulting decine...we shall never really know I suppose if it was the stress that brought something forward that was waiting for us but it seems we have yet another thing in common... Love the positive stance of your post, I have been described as being ' relentlessly positive' ...I cant imagine how bad life could have been and could get if I was not built this way...I therefore always feel lucky :-)

Jane said…
I've thought for a long time that some people have dementia lurking within them just waiting for a push. Ash's mum had it so I think it's in his genes but think it's very probable that without that level of stress it would have been much, much later in his life before it began to show.

Cornwall Girl said…
Yes I agree Jane as G's mother also had alzhiemers/ dementia but not until her mid 70's and G started syptoms in 2011 when he was 62 ....thanks for the reply. G is going to try another spot of painting this afternoon so will be interesting to see what creative design he has in store for us this time. lol
11 April 2020 at 12:40