January 12, 2021
If we're leading difficult lives is it enough just to survive or should we be aiming to thrive in the face of adversity?  I'm sure I'm not alone in moving into survival mode to get through difficult patches and I certainly did that in the run up to Ash's diagnosis and beyond.  I focused on putting one foot in front of the other and worked to get from one day to the next.  I had strategies: I shut down emotionally; I retreated into a world inside my head; I did the practical stuff such as cooking, cleaning, washing (but not ironing - things were never that bad), making sure we had fuel for heating, making sure we had food in the house, all things that I could control but never for a minute did I think about life being fun or even enjoyable.  Those strategies have continued because I still need to survive but at some point over the past 12 months I've realised that just surviving is no way to live, that there has to be more to life than that but what makes the difference?  What turns merely surviving into thriving, into enjoying life and, if not actually living it to the full, because dementia does limit things somewhat, then how to make the very best of what we have.  There are a number of things we as carers of someone with dementia are told which irritate me, one of which is 'he's still in there somewhere' - he's not and it's no good telling me any different - while another is to 'live in the moment'.  There's nothing actually wrong with living in the moment as a survival technique but as far as enabling me to thrive it's fairly rubbish, it limits my options, it narrows my world and it stops me planning for the future.  For the first two years after Ash's diagnosis I'd say I survived but not much more, I learnt to live in the moment with him and with friends and I began, very slowly, to think that life wasn't so bad after all but I still wasn't thriving, I still wasn't enjoying myself, and because of that I was still looking wistfully back at the life and relationship we once had.  Then lockdown came and, as I've said many times, something clicked in my head and I began to look at things differently.  I decided that if I had to cook I'd start doing it properly so I looked up new recipes, bought different ingredients and began to enjoy creating meals; I decided that if I wanted to get fit I'd put some effort into it and the more I invested in the exercise the fitter I became and the easier it was to do; I decided that if I had to do the gardening then I'd buy some books, look things up and reclaim it from the wilderness it was threatening to become; I decided if I wanted to lose weight I'd find a way to do it which didn't involve starving myself and the longer I stuck to the new way of eating the more weight I lost and the better I looked; I decided if I wanted to be able to look at myself in the mirror and smile maybe I needed some brighter clothes and because I'd lost weight and I was fitter I began to enjoy buying clothes which suited the new me and on and on.  And now I'm at the stage where I feel good about myself and my future.  It might not be the future Ash and I planned together but it's a future nonetheless and I figure if I've got this far on the dementia journey with a sense of burgeoning optimism then anything is possible.  And that I feel is a definition of thriving which has to be better than merely surviving. 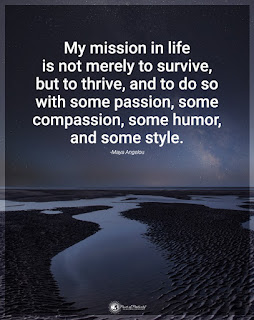 Tehachap said…
I agree... though my husband's condition isn't very severe, it's slowly but surely increasing. I'm grateful it's taking a long time because it means I still have him 'with me'. Blessings to you ... take care!
12 January 2021 at 22:50

Anonymous said…
No one can know what another person is experiencing unless they have experienced it themselves. Then it is personal to them and whilst similarities may be seen and felt it can never be the same. There are many life events where a feeling of bereavement is felt for a failed marriage, sadly a death, or even a betrayal within a relationship where not only do you question if you know the person you are with but yourself too. All theses and slightly the last where hopefully trust can be regained and relationship reinstated so have no need to move through the stages of grief can do so and move to a place with new beginnings and optimism. Those trying to cope with a loved one with dementia cannot truly move through this as the situation is constant but fluctuating and generally worsening. I am new to your story Jane but find your fortitude and strength to carry on finding new ways and positives whilst still supporting your Ash inspiring. We all develop and grow but fundamentally I believe our core self remains the same it is our response to our circumstances that mounds us as we navigate the future. Hopefully you will still enjoy some of the things you have done in the past but expand upon them. Keep strong and be careful with the chain saw!
14 January 2021 at 20:04

Jane said…
I think you're right in that our core self is always there but sometimes that self remains hidden just because it's never needed. I have no doubt that the things I can do now I could always do but I never needed to. The odd thing is that, although sometimes I wish I still didn't need the strength or the reserves, mostly I'm pleased with who I've become. Tehachap, I wish I could say I still have Ash with me but I know he disappeared from my life a very long time ago and sometimes I find it hard to remember what life was like when he was still here.
15 January 2021 at 21:01