Potential for disaster not realised

Not only does Ash usually wake up between 6am and 7am every day but most days he's earlier rather than later.  It takes a minimum of three cups of tea to clear the fog from his brain and then he comes downstairs, gets washed, cleans his teeth and takes Max for a short walk before getting his breakfast.  Getting the breakfast usually takes at least half an hour and then he sits to watch the news while he's eating.

This morning my car was booked in for it's MOT.  Based on our usual routine and the half hour journey to get there I'd made the appointment for 9.30am and slept solidly through the night knowing that was doable.

And so to this morning.  I got up as usual at 6 and waited to hear the signs that Ash was up and about, ready for the first cup of tea.  I went on my laptop, checked emails, researched some stuff for my day out at the end of the month, tidied my desk and waited.  Eventually, as all my timings were swept away one by one, I started to plan how to manage the morning differently.

If Ash was very, very late up could I still organise things so he could come with me or would I need to find a reason to go on my own?  Could I risk changing the routine a little or would he be too confused?  I can't hurry him at all and changing the routine is risky so the only thing to do was wait for him to get up then assess his mood, level of brain fog and ability to do things differently before making a decision.  I made several plans so that I had options and then I waited.  I waited and I waited until 7.10 when Ash finally made an appearance.  I looked at him and decided I'd be going on my own but that concerned me because I didn't really know how long I'd be out so that plan was put on hold for just a little bit longer and I made the first cup of tea.

That cup of tea was drunk and he came back down for a second.  At that point he asked, as he always does, 'what do I do when I've drunk this?'.  Usually I tell him that he has another cup before he gets dressed but this time I told him to drink that and then it would be time for dressing.  He went away quite happily and with no idea that this morning was any different to others that had gone before.

Ten minutes later he came down dressed, went through the rest of the routine and, once the breakfast was made, I casually mentioned the MOT saying that I could take Max while he ate and then he'd be able to come with me.  He jumped at that and I'm happy to say that we were out of the house and on our way exactly as  planned.

We arrived at the garage on time, dropped the car off, went for breakfast and had a really lovely morning out.  Not only that but the only sign that things had been off kilter at the beginning of the day was some confusion at lunch time but that was soon sorted.

I tell you all of this just to show you my thought processes whenever we have something to do which is slightly out of the ordinary.  I have to take the car back in two weeks time but have a feeling it might just be all that little bit easier a second time although I have no intention of assuming it will because that ways lies chaos. 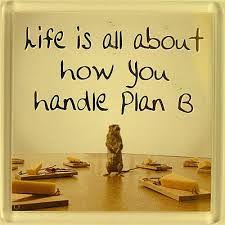