Success! but followed by a little confusion

I starting writing this afternoon and had begun to tell you about what a success yesterday had been.  The shopping trip had been a triumph with Ash taking a completely different role to his usual one.  Normally he passively pushes the trolley round while holding the list and crossing items off as I add them to the ever growing pile.  Yesterday S pushed the trolley, told Ash what item to look for from the list and he identified the brand we usually buy.  He was right almost every single time and his confidence built with every find.  Not only that but they used his bank card to pay the bill which was yet another thing he was so proud of.

S had sent me a detailed email last night telling me what they'd done, the subjects they'd talked about and the fact that Ash didn't seem to slow down at all.  Last week by mid afternoon he was mixing his words up and getting confused but not yesterday so I was going to tell you that too.

Those were all the things I was going to tell you and they were all true including the fact that when I told him at 9am she was coming he smiled and said 'that'll be nice' without once coming through with his notebook to ask the details.  Usually when I tell him someone's coming I'm asked again and again who's coming, why, when, how long are they're staying, all a sure sign that he's anxious, but not yesterday morning.

I was also going to let you know that yesterday they'd planned what they were going to do next week when she comes including some places Ash is going to show S because he knows them and she doesn't.

So it was a very successful day and I have a very good feeling about it all even though I'm trying hard to keep my expectations low.

I was going to tell you all of that and also that today there were no after effects felt other than Ash giving me a hug which would have been the most unusual thing of all except that I got a hug last week after S went home. That was one of the things that alerted me to the fact that I'd stumbled across a very good thing indeed.  However that last bit wasn't quite true which is why this is a slightly different post to the one I started.

Ash was on an even keel all day today right up until 5pm.  At 4pm most days we watch tv together for an hour and then we feed Max so we'd watched a quiz show and then had the following exchange:

Ash: At this time of the day?

Ash: I didn't even realise we were out, what time is it?

Ash: We don't usually feed Max in the middle of the day.

I didn't comment but just got up from the sofa and walked out of the room.  Ash followed me, not exactly sure what was happening but willing to find out and we were soon back on track.  We were back on track right up until 15 minutes later when he asked if we'd had tea yet.

I do know of course that yesterday will have tired him but the fact that we got through most of today without any sign of anything untoward lulled me into a false sense of security.  What I also know however is that the benefits of being able to spend time every week with someone who still treats him as a colleague rather than someone who needs taking care of is making all the difference and that difference is wonderful to see. 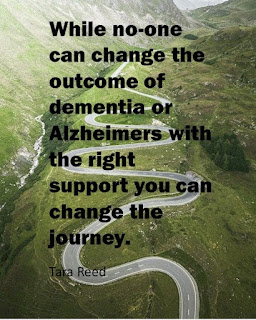 CW said…
It's always a bit of a shock when they are suddenly 'off' from reality. You never expect it when things are going along as normal as can be. I now recognize anxiety in Robert now that you've explained how Ash reacts to stressful situations (i.e., people coming, etc.). Robert doesn't like people visiting, nor does he like me to leave the house, but then he doesn't want to leave the house at all either. I don't see myself as ever being able to have someone come to sit with him. I don't think he would tolerate it at all.
23 October 2021 at 15:19

Jane said…
I thought exactly that about having a carer in but it seems it is possible. I've talked a lot about the book Contented Dementia and there's a whole section in there on how to go about it which I found really helpful. The trick is not to present it as someone coming to look after them.

The other thing I would say is that sometimes we think of the carer as being solely for our benefit but Ash is so much better after a session with someone other than me that it puts a whole different perspective on it. The other reason I first put something in place was because I worried about how he'd cope if there was an emergency of one sort or another and I couldn't be here. If If I'd never left him with anyone else before his distress would be off the scale.
27 October 2021 at 20:45