For the first six months of this year I took part in a creative writing project in which we had to produce excerpts of our lives growing up.  There were nine of us and at the end of the six months our scribblings were turned into a book.  The first thing I noticed was that, whereas everyone else began with their early childhood, my stories were all from being a teenager.  As I thought about it all I realised that I didn't have many clear pictures in my mind of my early years and  the vast majority of my memories began when I met Ash.

I don't mean that I don't remember anything from before him because of course I do.  I remember holidays with my mum, I remember my grandparents moving in next door but one to us and always being there when I needed them, I remember mum working all the hours she could just to provide us with what we needed and I remember flashes of primary school.  I remember all of that but the clearest pictures are definitely from about the age of fifteen onwards and I wondered why that was.

This morning I was walking with one of my friends who's recently started exactly the same project.  She'd sent me the first thing she wrote which was titled 'Beginnings' and once again it was about her early years.  She'd read all of my offerings and had also noticed that they were about my teens so we talked about it and about growing up.

I said I couldn't understand why I couldn't remember those all important early years and this friend, who I've known almost forever and certainly since I was 11, said that she didn't remember anything before she got her first pony at the age of 7.  At that point apparently her world opened up and the adventures began.

Suddenly everything began to make sense as I realised that the minute I started going out with Ash (at the age of 15 remember) my world too opened up and that was the point at which all my adventures began.  He introduced me to a completely different way of viewing life; one where it was ok to laugh at yourself, where everything was an adventure and life was full of fun.  None of this had really occurred to me before and he added a colour that I think was missing before that all important day (24th July 1976 if you're wondering).

I have no idea whether he really is the reason I don't remember anything from my early life but what I do know is that every piece I wrote for the memoir project except one was about Ash and that tells me all I need to know I think. 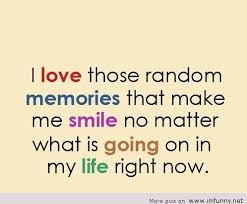 Carol S. said…
I find this post really moving Jane. I think it really highlights the strength of love in our lives - and that’s what will help us through this stage. Here’s to lots of memories that make you smile - 🥂
15 November 2021 at 22:51