The oddness that comes with dementia

No posts for a couple of days because, as you may have noticed if you get this by email, I messed up the settings.  All I wanted to do was change the time the blog post went out and for some reason I decided that I was a grown up and could sort it out on my own.  I very quickly realised I was no such thing but luckily I have a friend who is a grown up, in IT matters anyway, and she sorted it all out for me quite quickly.  At least I hope she did but this post will be the test.

Quite a lot happened over the weekend but the one thing I really wanted to tell you about as soon as it happened is imprinted on my brain because it was our most recent brush with the oddness of dementia.

First of all, when he was about to lay the table for tea on Saturday, Ash came through and asked me if Jane was coming home or if she was sitting with her mum.  I said Jane wasn’t going to be home and he was fine with that.

Next, around 9.15, he got up from his chair, came over to me and asked me if mum was going to be home soon or if she’d be out all night.  I think then that he thought I was Jake.  I said it was just going to be the two of us all night and again he was fine with that.

When he got into bed I kissed him goodnight then went for my bath but could hear him moving about.  I finished quickly and went through to find him with the blind up and the window open.  Got him back into bed, closed the window and pulled the blind down.  The window lock doesn’t work in that room but I'm sure you won't be surprised to hear that I'm now going to get it fixed.

At 11.30 I heard him up and about again.  Went through and he was behind the bedroom door.  As soon as I opened it he started laughing.  Got him back into bed as he said (still laughing) ‘it wasn’t me, she made me do it’.  He then slept in until 8am, waking up of course with no memory of any of it.

All very odd and the first time Ash didn't recognise me gave me a serious wobble.  As always though the second time was easier and I've been thinking about that.  I always find the first time of any of this difficult, the second time easier and by the third time whatever it is has become the new normal.  My thoughts have brought me to the conclusion that the first time is difficult because it's new and I don't know how to react which makes me feel as though life is spinning out of control again.  The more it happens the stronger hold I have on it and the more power I have over it all so the easier it becomes to deal with.

So all very odd but no problems since and we seem to have settled back into our usual routine.  Fingers crossed it continues for a while at least. 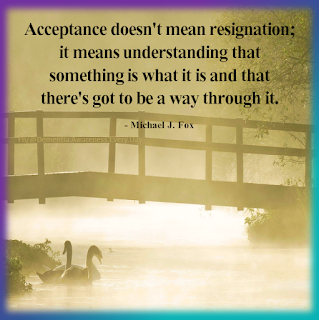 Carol S said…
This mirrors my own experience Jane. It is strange how quickly, and easily, we can move into a new normal. Wish I’d found it so easy to ‘go with the flow’ when I was younger - some parts of my life could have gone so much more smoothly. Loving the Michael J Fox quote. Thanks. Cx
15 November 2021 at 22:59

Tehachap said…
Oh my... it is a definite sign of progression for Ash, but still, it was a real shocker for you to have to respond to. But, the way you look at these incidents is indeed the right and only way. We're shocked at first, but by the time it happens again, we're slightly prepared for it and able to just go with the flow. Hugs to you...
16 November 2021 at 00:38

Cornwall Girl said…
Yep our parallel universe is at time amusing and tear producing all within minutes. G gas taking to singing middlebof the night 🤨🥺😁😁
16 November 2021 at 14:52

Jane said…
It happened again tonight. I was getting tea organised when Ash came through and asked me if Jane would be back to eat with us. I felt weird but not as weird as the first time and I didn't wobble so that's something else tucked away as 'normal' that those not living this life wouldn't understand.
16 November 2021 at 20:19