This morning I was due to pick up a friend and go for coffee.  We were looking forward to trying a new Italian place that's opened up not too far away just to see whether or not it lived up to expectations.

That was the plan but then Ash came downstairs at 6.20am.  In the usual run of things I get up around 6am and manage at least an hour to myself before he comes down blurry eyed for the first of his cups of tea.  On a normal day it takes a minimum of three cups before he's properly functioning and sometimes there's a fourth in there too but this morning he's bright eyed and bushy tailed before he's had the first cup which may or may not bode well.  I'm unsettled because it's all an unknown.  On top of that he's excitedly telling me something but I have no idea what so it doesn't help to work out what's going on.

This early start means Ash is up and dressed by 7.10, the time he's usually just waking up, and then I have to work out what that means for my morning.  Can I still go? Will he be ok on his own?  I have no idea so decide to wait and see for a bit longer.

The next thing that happens to put a spanner in the works is the plumber emailing to say that he's calling this morning to look at the boiler but has no idea what time.  He's reliable so I know it will be before lunch time but other than that I'm reliant on Ash remembering not to go for a walk the minute he's bored so I factor this in.

And then there are the notebooks.  Ash has a notebook which he carries everywhere with him and that he begins to fill in the minute he wakes up.  In it he records what time he woke up, what time he had each cup of tea and then, through the day, anything he thinks worth recording which sometimes is nothing at all, sometimes the name of someone who's called in and sometimes something he's done.  We buy several at a time but he was coming to an end of the current pile (or at least he thought he was which was the important thing) and needed more.  He also decides he needs a 2022 diary.  This has to be black and A4 size and is used to record what bins go out on which day.  That's it.  Very, very occasionally he'll record something else but mostly it's the bin information.

I'm due to collect my partner in crime at 10am so work out that if we're in town to buy the notebooks by 9am he's likely to spend the morning sorting them out which means I can have a couple of hours drinking coffee and putting the world to rights and he'll be fine.

Get the notebooks and diary, come home and start to get ready to go out but it becomes very obvious, very quickly that it's not going to happen.  More and more frequently now Ash stands in the kitchen unable to think what to do with himself and this was one of those days so what to do?

I think quickly, take a second chair up to my room to add to the first, ring the friend explaining what's happened and ask if she minds coming here instead of the lovely new Italian cafe.

Of course she says she doesn't mind at all.  She arrives, I make us a cappuccino each, sneak a couple of cheese scones (baked for Ash yesterday) out of the tin and we spend those two hours up in my lovely room eating, drinking and putting the world to rights almost as we'd planned.

You see, there is always a way it's just that sometimes is not the way you first thought of. 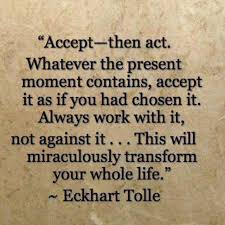 Tehachap said…
I love Ekhart Tolle and used to follow him online. I've read all of his books and have long since given them away to others. His advice is very sound and it looks as though following it gave you and your friend a very nice visit. It boils down to going with the flow of life, never fighting what is, just accept it. Good job!! So glad you fixed that room up the way you did. Excellent!
17 November 2021 at 22:56

Jane said…
I'm so glad I fixed the room up too. Have decided to leave the second chair up there and paint it to match the first then, when I can't go out and leave Ash it won't be complicated, I'll just invite people here.
19 November 2021 at 08:21

Carol S. said…
I love Eckhart Tolles work too and have found it very helpful in living alongside dementia . Think you found an excellent solution Jane. Great idea to develop a cosy personal space at home to retreat to either alone or with visiting friends. Thanks for sharing. Xx
20 November 2021 at 09:35

Jane said…
Being flexible really is the only way to go isn't it. In the past it wasn't something I was particularly good with but dementia is teaching me new skills I never knew I needed.
23 November 2021 at 07:30