Life has its ups and downs

A few up and down moments as usual but really we're on a fairly even keel so life isn't too bad.

The first sign of how far we've come over this last year was to be seen when we went to deliver Christmas cards around the village.  Last year Ash went with me under sufferance, spent the whole time refusing to speak to me or interact with anyone we met.  He was absolutely vile and I just wished I'd left him at home.  Cut to Friday and he walked with me, chatting as we went, pointing out things of interest and chatting with friends on the doorstep.  The difference was amazing and I'm convinced that it's all down to having carers in.  L may not have worked out in the end but she did boost Ash's confidence in the beginning and now we have S who is just a miracle worker.  Both of them, and Jake, have shown Ash that he can manage without me and that has made such a difference to him.

Yesterday wasn't quite so good and I wondered whether that was because I went walking in the morning.  I really hope that wasn't the reason because I've had a feeling for a while that those walks might be coming to an end not because Ash needs me particularly but because he no longer does well in his own company.  I was back home by 11.30 only to find that lunch had been eaten already which showed that he was confused but also at a loss what to do with himself.  The afternoon saw him back on track when we went to deliver cards outside the village.  Ash held them, read the envelopes, told me who to visit next and generally seemed on top of it all which was nice.  Then came tea time when he momentarily took me for S.  It wasn't the first time so had no effect on me which was a relief but he obviously wasn't quite as on top of things as I thought.

This morning he woke me up at 3.10am in a confused state which I dealt with very patiently.  What I didn't deal with quite so well was finding him bright eyed and bushy tailed at 6am when I felt as though I'd been hit over the head with a cricket bat.  When Ash wakes that early he's up and dressed by 7am and so it was today.  The problem with this is that he has too much time on his hands and has no idea how to fill it so this morning was a struggle.  We got through it though with me biting my tongue so much it was almost bleeding but this afternoon was better and so we go on.

This is already a very long post and I'd hate to bore you so I'll wait until tomorrow to tell you about the scone discovered lurking in the cupboard, the trials and tribulations of putting the Christmas cards up and the story of the bin.  None of those are earth shattering but each one served to show me how Alice must have felt when she went through the looking glass. 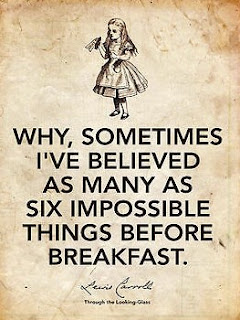 Carol Westover said…
Oh, you are absolutely right on target. We went to Bakersfield today, to pick up Robert's new glasses. I got him settled at the desk there at the optometrists and went to the lady's room. When I got back, Robert was wearing one pair and he had a red bag in hand. I asked him if he was ready and he said yes, and the girl said he'd tried on both pair. I wanted to go look for a rug for the bathroom but Robert didn't want to walk around, so he went to the car. BIG MISTAKE... I couldn't find a rug, so headed to the car. When we got home, Robert took the bag out of the car but there was only the one glass case in it. Somehow, between the desk at the optometrist's and the car, he'd lost the second pair of glasses. We've looked all over the house and all over the car twice. I called the optometrist's to ask if he'd perhaps left the glasses there on the counter. No, they said they'd put them in the bag. Then I called the store customer service desk to ask if anyone had turned in a pair of glasses in a case. Described the glasses and the case and they checked, came back and said no one had found any glasses. Back to the optometrist and I asked them to reorder the single vision glasses. They said they would call me back with a cost. I said, cost didn't matter, just order the glasses because he'd lost the first pair. What do you begin to say to someone with dementia when they do things like this??? Nothing. Absolutely nothing. He's feeling worse than anything I could say to him.
19 December 2021 at 23:48

Jane said…
and that's an expense you don't need at any time but especially not at Christmas. You're right though, there is nothing you can say and I'm very impressed with how you dealt with it all. The perfect response I think.
21 December 2021 at 19:38

Jane said…
Just seen your blog post Carol and it seems you had a reprieve on the glasses situation. Isn't it lovely when something unexpected like that happens. An early Christmas gift I'd say.
21 December 2021 at 20:19