Thursday is bin day in this village and it's Ash's job to take ours to the top of the drive and leave it by the roadside.  They're collected very, very early so need to go out the night before and if anyone forgets the bin doesn't get emptied for two weeks.  Two weeks ago Ash forgot to put the bin out so yesterday I reminded him and off he went to deliver it to the relevant spot.

Later in the evening there was something needing to go into the bin so Ash took it up in the dark and all seemed well.

This morning he went out with Max for his early morning trip round the church and came back to tell me that he'd missed the bin men.  I really couldn't work out how that could be so, stupidly, started thinking out loud about what could have happened.  I decided that the bin must have been missed and, again out loud, decided I need to ring the council and get the lorry to come back.

At this point Ash was getting cross and telling me it was nothing to do with the council so I thought he must have brought the bin back last night when he took the extra rubbish up.  Remember at this point that, when dementia is involved, absolutely anything is possible and that scenario was absolutely probable.

My biggest concern was that when I looked in the bin yesterday it was absolutely full and there was no way we could get another 2 week's rubbish in it.

Before I went in the shower Ash tried to explain what he'd been talking about but I couldn't work any of it out so he got cross and, instead of remaining calm and collected until I could get out there and look, I shouted, he shouted back and everything went pear shaped.

Finally I managed to locate the bin in it's usual place.  I opened the lid, looked in and it was absolutely and completely empty.  So what an earth had just happened?  I had no idea and it was another of those times when I felt the world tilt on its axis and it seemed I'd followed Alice down the rabbit hole once again.

These episodes, although not regular, confound and exhaust me but there was still my mum to visit so all had to be put to one side and ignored.  There were more important things to think about.

It was a few hours later, as I walked around town in the rain, that I realised what had happened.  Occasionally Ash sees the bin men when they're in the village and on a couple of occasions he's had a joke with them and taken photos.  What he'd meant was that he'd been too late for the photo opportunities.

I know that I've added lots of new skills to my CV recently but I have to tell you here and now that mind reading isn't one of them and life would be so much easier if it was. 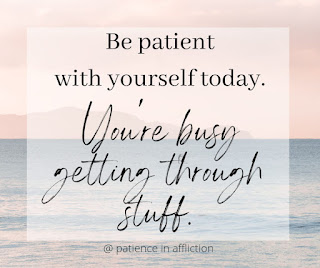 Jenny said…
Oh I have been there so many times. Cool calm and collected Is an ideal to be achieved occasionally. Doing the best you can at the time is more likely. When I read that the bin was emptied after all I was so pleased for you. In my experience dementia means we are grateful for the small things.
23 December 2021 at 20:59

Lorraine said…
Your story sounds so familiar. I am trying so hard to try and have your mind set si us good to know, for me, that you lose it sometimes. Don't be harsh on yourself. We do our best
24 December 2021 at 09:22

Michelle said…
We had a wheelie bin episode this week too!  Our kind neighbor takes turns with us alternate Thursdays bringing our wheelie bins back up our drives after they've been emptied. We always put ours out on Wednesday evenings and he puts theirs out first thing Thursday morning. So this week I gave T our final bits and pieces to be thrown and sent him out to take the grey bin down our drive to the pavement. As per usual, he came back in to check (again) which colour bin it was this week. He was gone a while which I mentioned on his return whereupon he said that he wasn't quite sure he'd put next doors in the correct place.  But T we don't ever take their bin down, never have, to which I received the very irate and impatient reply that he ALWAYS has done this. So of course I told him no he hasn't and......yep stroppy teenager behaviour followed which is becoming quite the norm.  I text the neighbour (who has had previous dementia experience) to explain his missing wheelie bin, who to my shame replied not to worry - please tell T good job!  Much as I try, I do wish I could be this good person 100% of the time!

Jane said…
I'm becoming used, mostly, to not arguing. In Ash's head, what he tells me is the truth so who am I to disagree? and actually yesterday I really wasn't arguing I was just thinking out loud and trying to work out what to do however, as a friend told me earlier, what I should have done was kept quiet until I could investigate. That's the bit I'm not good at.

And I really am grateful for the small things. They're what makes life manageable.
24 December 2021 at 20:18

Marcia said…
What is it about the trash bins? Ours are supposed to be about 3 feet apart, recycling in one, trash in the other. It is my husband’s job to take them out there weekly. Well, they kept getting further and further apart. We used to argue about it, and he would say, get the instructions from the city, etc. I would be furious, thinking he was being intentionally obtuse. Quite awhile back now he was diagnosed with dementia, and I realized that was a measure of the brain function, and finally could laugh about it. One was almost in the middle of the neighbor’s yard.

But I get the point, and it sure is a lonely place to be when we can’t even think aloud, which is all I do, without being attacked. I try and try to “crack the code” as it were, but sometimes I am just so tired and have no patience. Then we get into these snippy back and forths. I end up feeling guilty and so on.