The oddness of life

There are so many ways I could describe this life we lead.  So many ways I could show you how far from normal it really is but it would be impossible to list them all and to be honest, unless you too have dementia in your life, you might not even totally believe me.

Would you believe me if I told you that currently I have bags of vegetable crisps stashed in various places  around the house and that frequently I open a cupboard and one of those packets falls on top of me?  The reason?  because Ash eats lots of them and they're expensive so I have to buy extra when they're on offer and then I have to hide them or he eats even more than normal just because he can see all the bags.

Would you believe me if I told you that I had my first nap of the day at 9am today and my second at 1pm?  The reason? Actually this time it wasn't totally Ash's fault that I was exhausted before the day started because he's not the only one who gets me up in the middle of the night.  This time the first culprit was Max who started howling at 1.45am which means he needs to go out; next up was Ash who only went to the bathroom but, because I'm permanently on alert, the minute he gets out of bed I'm awake.  Obviously both Ash and Max went back to sleep easily but for me it was a different story hence the naps.

Would you believe me if I told you that we now have the battle of the doors?  The reason?  You may remember the hair cut battle closely followed by the coat battle and if you do you might be pleased to know that both of those issues are resolved.  Ash gave in with regard to hair cuts and I realised that we don't live in the sort of climate where he'll get hypothermia if he doesn't wear a coat so I gave in on that.  Today a new battle began and now Ash has decided there's no need to shut the outside door when he goes out into the garden.  His reasoning is that he's only going out to the bin/coal bunker/shed etc, he's coming back in very soon and he definitely doesn't need to close the door between going out and coming back in.  That's fine in the summer but not so good at this time of year.  I haven't quite worked how to deal with this one but I began, as you would I think, by closing the door after him tonight.  This went down like a lead balloon because apparently he knows what he's doing and I don't need to follow him around.

There'll be a reason for the door issue and of course there'll be a solution but, as usual, I've been taken by surprise and haven't quite got my head round it all just yet.

Finally, I don't think I ever told you the final instalment of the pork pie saga.  You may remember that I used to find pork pies in the cupboard in the dining room on a very regular basis.  I learnt to keep an eye on one particular cupboard and usually managed to retrieve them in time and put them in the fridge.  If you've only just joined us however you might not know about the pork pies so if you want to know more then you'll need to go to the top of the blog page and search for 'pork pies' to get the full story.  Anyway a few months ago I rearranged the furniture in the sitting room and moved a cupboard I hadn't looked in for years.  I had to empty it before I moved it and there, nestling on the top shelf, was a very rotten pork pie.  It was past green and had actually turned yellow.  I have absolutely no idea  how long it had been there but also absolutely no idea why Ash would have used this particular cupboard in the first place.  It was at the back of the room, about as far away from the kitchen as it could possibly be and hadn't been used for storage for a very long time.  Who knows what went through his head when he placed the pie in there.

A few weeks ago a friend commented on the oddness of my life and I couldn't see what she meant.  Reading back over these I now understand. 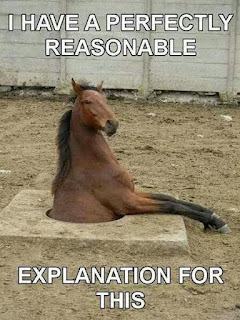