Yesterday was a good day

Two days ago someone left a comment saying I should remember all the times when Ash had supported me and I really, really do but supporting someone with dementia, someone who has become a stranger, is something else altogether.

In a normal life, as a normal couple, you support each other.  S, who you may remember used to work with Ash many years ago, told me the other day how much he appreciated my support for his job.  He could go off in the early hours of the morning and there was no knowing where he was going or when he'd be back but it was part of our life and he loved that job so I was behind him every step of the way.  He once drove off with us both thinking he'd be away for two days; two weeks later he came home carrying two hand blown wine glasses not as a peace offering but as a thank you for not moaning once.

For his part Ash supported me when I worked long hours and came home stressed on an almost daily basis.  He was interested in what I was doing and he was there as my shoulder to lean on whenever I needed it.  We were a mutual support network and to counterbalance all of that there was fun and laughter.  There were hugs, glances across a crowded room, secret smiles, all that makes life as a couple meaningful.

The difference now is that my support is there, absolutely and completely. I'm here for as long as it takes but there's no counterbalance and if you're not living this life you can have no idea what a slog that makes of it all.

And yet ........ yesterday was a good day.  In fact it was a lovely day.  Ash was mentally switched on so I suggested we went to town in the afternoon and choose food for Christmas.  He looked at what was on the shelves, decided what he wanted and helped me choose the best packs.  We had conversations, we laughed together and generally enjoyed being out.  I came home buoyed up and with a general sense that life wasn't too difficult after all.  I could do this and the future looked better.

This morning we were back to normal and I was living with a complete stranger who had no idea what to do with himself and insisted on going out in the pouring rain without a coat.

I don't forget all the support Ash has given me over the years but I know it was a two way street.  This is different and what makes it so much more difficult is that I never know exactly which version of him I'm supporting.  Sometimes that makes me resentful but I'm still here and I'm still committed so, if you're not living my life, please don't judge me. 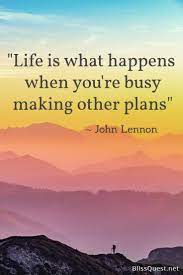 aliceinmemoryland said…
As a spouse caregiver I have to comment that you seem to have found the perfect balance of supporting Ash and staying true to yourself and a person in your own right. No easy task.

Jenny said…
Gosh no one knows what it is like until dementia appears. All of my thinking was focused on my partner and then one day I realised that I had forgotten the good times. Sure they are there but the here and now can’t be ignored. It is exhausting.
6 December 2021 at 05:35

Carol S. said…
When Ash has a good day you always seem to manage to make the most of it and give him good experiences. To my mind when he has a bad day you generally know how to best deal with it and on the occasions when it just seems so overwhelming you dust yourself off, build yourself up and are always there for the next stage of this roller coaster. Reading your blog is so helpful for me caring for my partner, especially because you are so honest and are prepared to visit those dark areas and often have some learning from them that we can all share. Thankyou Jane 🤗
6 December 2021 at 09:08

Lorraine said…
You said that so well Carol. I hope I can manage as well as you Jane. I read your blogs regularly to learn and inspire me to try as hard as you do.
7 December 2021 at 07:35