Highs and lows of a difficult day

A very difficult morning brought with it some surprising compensations.  There are no details of the difficult part because they're not mine to tell and, for the purposes of this blog, it's what followed that's important.

After the difficult part I came home and threw myself on Ash's shoulder.  What was really lovely was that he seemed to be expecting it and held me tight until I pulled myself together, wiped my eyes and suggested lunch.

During lunch I mentioned going out for a cup of tea later as a means of cheering us up at which point Ash left the room.  He was gone a few minutes but came back with the £10 note that I always make sure is in his wallet and announced he'd treat me.  This was so thoughtful and unexpected that I had to blink back more tears before I smilingly accepted.

We went out and had a lovely time.  There was singing in the car on the way, tea/coffee at the garden centre and a wander around the outdoor furniture (we even caught sight of some plants in the distance) and then a lovely drive home.

Home however was where it all began to go pear-shaped.  Ash had stepped up when I needed him but all of that emotional support had put him under a huge strain and confusion reigned.  No idea how to make a cup of tea, one hearing aid nowhere to be seen, bins still in place even though he'd apparently taken them up to the road (somehow getting wet in the process even though the bins hadn't moved) .........., chaos was all around and once again the earth was shifting beneath my feet.

Luckily, although this morning it was lovely to have Ash to lean on, I've discovered along this dementia strewn road that I am capable, that I just need to take a deep breath and think calmly.  I remind myself I'm an independent woman who can stand on her own two feet and things begin to come into focus.

I gently placed tea making items in front of Ash, found the hearing aid, put the wet clothes to dry and got the bins up to the road ready for collection in the morning.

When all of that was sorted we sat down with one of his favourite quiz shows and I watched as he gradually came back down to earth.  We're now back to normal (which of course is anything but normal) but he knows he helped today and that's important. 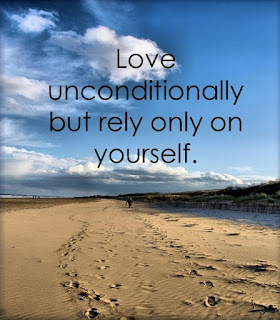