The real Ash makes an appearance

I'm writing this the morning after the night before and feeling amazed at how much has changed in the last few weeks.

The 'night before' was yet another successful social event and I still can't quite believe we went.

It was 'Bike Night' in our local town with hundreds and hundreds of motorbikes and their proud owners lining the streets.  Live music played from a trailer in the market place, stalls sold food, pubs and shops were open and people arrived in droves.

This is an annual event but, even though Ash spent much of his working life on two wheels, we hadn't been.  He'd never shown any interest in the event and any time I'd suggested we went the idea was dismissed.  But not this time.  I tentatively made the suggestion a couple of weeks ago and was met with enthusiasm so I allowed a little hope to flare but daren't really think that things had changed that much.  Only, whenever I mentioned it, the enthusiasm was still there and so we went.

From the minute we got there we had a good time.  Ash was full of energy; he laughed, took photos, spotted people we knew, chatted to people we bumped into and generally enjoyed himself to the full.  When we'd been there an hour I asked if he'd had enough and was ready to go home. The reply? 'I think we should stay a bit longer'.  Are you as surprised as I was?  We stayed two hours in the end and it was lovely.

For years and years, it seems, I lost Ash and, however hard I looked, I really couldn't find him but last night he was back.  All of the energy, joy and excitement were on show and I remembered why I loved him.

This isn't a fairy tale of course and, not to put a dampener on it or anything, there is no happy ending.  Not just because of the dementia but because, in all those years, we lost something vital.  You can't live with someone who appears to dislike you intensely, who takes all of his grief and anger out on you, and come through it unscathed.  So at the moment I'm very grateful to be heading towards the end of the tunnel with peace between us, I'm happy that we're happy but that experience has changed me beyond belief and my feelings will never be the same again.

On a brighter note, this will be my last post for a whole week because, in three and a half hours time, I'm going on holiday!!!

I haven't mentioned it before because the last two times I had something big planned I had to cancel and I was devastated; this time I didn't want to tempt fate by believing it would actually happen.  The day is now here though; Jake, S and two other friends are stepping in and I have ahead of me seven whole days with no responsibility.

See you next week and I'll tell you all about it. 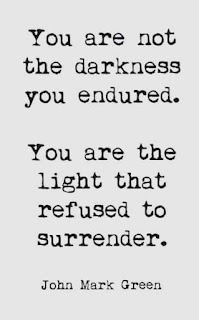