The garden sets me thinking

I've discovered something this year and I thought I'd share it with you.

As many of you know Ash always did the gardening.  He used to tell people that I was chief 'pointer' - I'd point or wave my arms and say 'I think we should .........' and he would set to and turn my vision into reality.  He really could do anything and sometimes I only had to start the sentence and he'd leap into action.

Plant advice came from a friend and everyone always said everything in the garden was lovely which it was.

Then came dementia and everything changed.  Even before the diagnosis Ash had lost interest and slowly the garden became just a little bit wild.  I'm not always the most perceptive of people and it took a while for me to notice that weeds were growing in abundance, that bushes were spreading and plants were so crowded that they grew at odd angles.

Then came lockdown and there was nothing to do other than garden so, with Ash looking on (or glaring at me, depending on your point of view) I began to dig up the weeds.  Last year I replaced some of the old plants with new ones and it all started to look tidier but there was something still not right.

I mentioned to some of my gardening friends the fact that I didn't really like plants growing into each other and every one of them looked at me as though I was mad.  Look at any spectacular garden and they all have full flower beds so I decided I was wrong.

Then came this year and I thought about it all again before coming to a decision.  I would take out all of the plants I didn't really like, I'd split those that had grown in too much profusion and then I'd wait until everything had spread so that I could see where the gaps were and could decide what to plant in those gaps.

We're now just about at the stage for filling in those gaps but guess what ...... I've realised I love the gaps and I'm going to keep them.  The slimmed down flower beds fill me with more joy than the full ones ever did and, as I look at it all, I decide that I really don't mind whether others like it or not.  I find this new style garden glorious to look at and it makes me smile every time I look out of the window.

This I think is a brilliant metaphor for life.  We only have the one and it should be lived the way we want to live it.  We can't have everything we want, obviously, especially not if we have dementia in our lives, but we can make the best of what we have.  The important thing is to do the things that make us smile without worrying about what others think. 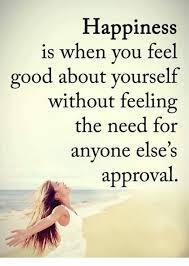 Tehachap said…
Thank you for this. We just returned from looking at a mobile home that's being offered for sale. I wasn't pleased with it at all but Robert felt it 'would suffice for our needs.' After reading your post, I feel better that I turned down this house and know that there will be one in the future that immediately puts a smile on my face! Thanks!
15 June 2022 at 02:16

Jane said…
It's so easy isn't it to go with 'It'll do' but, even with dementia around, I think life should make us smile wherever and whenever possible.
15 June 2022 at 07:00

Carol S. said…
Just like your garden we have to work out what is best for us - especially when living with dementia others may not get it but we are the ones living this life and we need to do it in a way that makes us happy and not feel our life has to fit to others norms. I can feel quite content with my life but if I make the mistake of looking at in from others’ perspectives I can get quite down - so I won’t 🤗. Metaphors aside you’ve inspired me to spend more time on my garden - as I spend more time at home I’m sure it will pay dividends and it is satisfying once I actually get started!! Thanks Jane.
15 June 2022 at 08:23

Jane said…
I never really gave our garden a thought before dementia, it was just a nice place to sit, but now I really feel I've taken ownership of it. I still know nothing about gardening but am getting more and more confident at experimenting with plants and now I have time to sit and look at it all I'm getting ideas on how I want it to look. I've also come to the conclusion that if I don't like a plant, either for how it looks or where it is, then nothing I can do to it will make it worse. This realisation has been a revelation.
16 June 2022 at 18:03